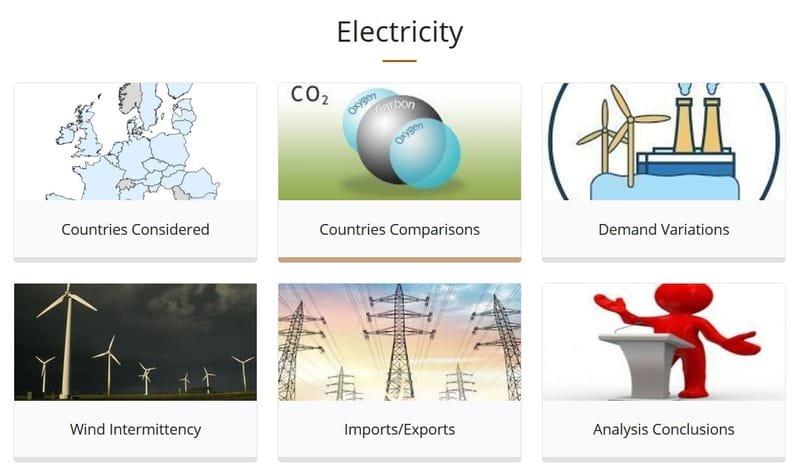 The analyses of electricity production data presented here, demonstrate that fossil fuel generation cannot be replaced by wind and solar power alone. The intermittent and uncontrollable nature of these "renewable" sources mean other sources must replace their drops in production. Furthermore, other generation sources must match the demand variations which are a major feature in the consumption of the country economies.

Data from 27 countries in Europe are considered,  enabling detailed studies to be made comparing countries with different mixes of electricity production. There are pages for all individual countries which provide plots on fuel generation mix and demand variations.

The magnitude of CO2 emissions depends on the fuel mix available in the different countries. Plots illustrate clearly that large nuclear and hydro production can yield low CO2 emission. Wind and solar cannot completely replace fossil fuel generation such that countries with large wind and solar also have significant emissions.

It is obvious that in a particular location the wind fluctuates. It is less obvious, and apparently less well known, that fluctuations in wind speed can be coherent over whole countries and regions such that there can be a lack of wind power output everywhere. These pages aim to explain this with examples of electricity generation data . There are also explanations of the basic reasons why this is the case.

Solar power is obviously even more intermittent than wind power with zero output at night in addition to low output during cloudy periods. In winter at high latitudes, even during cloud free days the out put is greatly reduced by the low sun elevation and energy absorption in the atmosphere.

A further power loss for most solar farms is the fixed panel orientation which reduces the power output when the light incident angle to panel is large.

Consumer demand for electricity varies dramatically between night and day and between summer and winter. Countries with large hydroelectric resources are able to satisfy these variations with changes in hydro production, however many countries must do this with fossil fuel generation variations. Nuclear generation can be controlled to contribute to satisfying demand variations but wind and solar cannot. Imports and exports are currently used by some countries but coherence in weather across Europe means that this would not be possible with increased fractions of wind+solar in generation mixes.

Some European countries rely heavily on imports from neighbours; in particular Denmark compensates almost completely for changes of wind production with imports and exports.