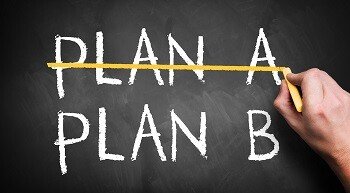 This website has concluded that the mainstream approach to commercial fusion reactors, which is largely funded from public sources, will likely fail. Alternative fusion techniques have existed for several decades but until recently the primary research focus has been on the mainstream technology. Now, there is revived interest in alternatives, largely from new privately funded companies, and this page presents some details of these projects.

Fusion companies based on private finance

More than 30 start-up fusion companies, with a miscellany of ideas, have appeared in the last decade. The Fusion Companies Survey by the Fusion Industry Association (FIA) provides a summary of the status of these companies. 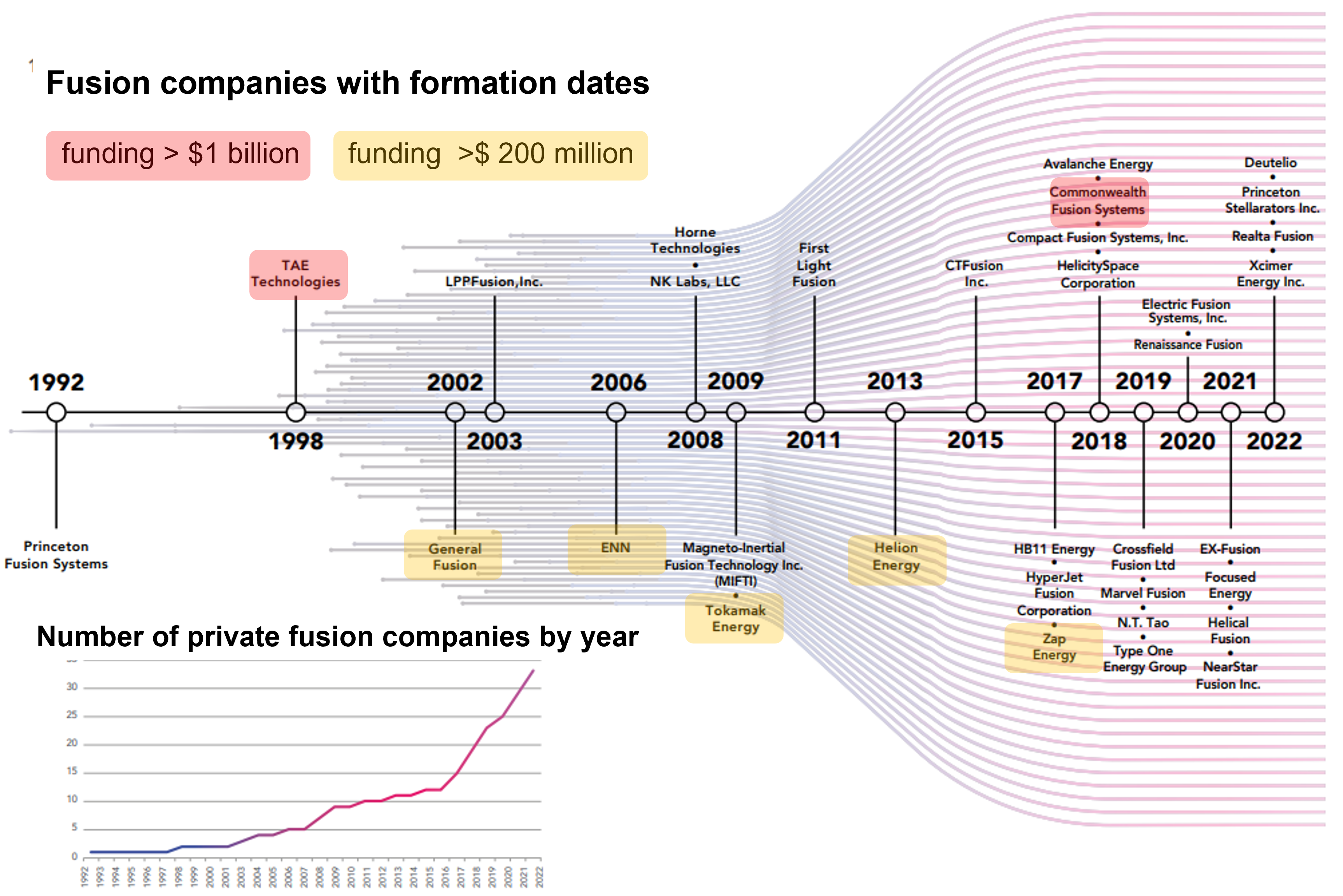 The Fusion Industry Association survey describes 33 companies which have received a total funding of $4.9 billion, of which 98% is from private sources. The HQ of these companies are mostly in the USA (21/33) with three in the UK and three in the EU. In this survey, seven companies had funding >$200 million by 2022 and, in sum, received funding of $4.5 billion, 93% of the total.

Of these seven companies, four plan to use the same fusion fuel of deuterium-tritium (D-T) fuel as the mainstream approach and three plan on using alternative fuels, two p-11B and one using D-3He. Among the seven, three are using compact tokamaks with high temperature superconductors for the magnets, while four have very different techniques.

A common feature of the private companies is an incredibly optimistic timescale, with the FIA survey introduction saying: "the vast majority of companies predicting fusion will first power the grid at some point in the 2030s". All the biggest seven companies quote such a timescale independent of technology or present status. These claims do not seem to be based on any reality. David Jassby in his article: Voodoo Fusion Energy expresses sceptical views on these timescales based on their history, where the original predictions of some of the companies for commercial fusion have already expired.

Given the tritium supply situation described on the page, Lack of tritium fuel supplies, it is not surprizing that 11/33 of the new fusion companies are exploring alternative fuels to Deuterium-Tritium, but the use of these fuels presents challenges. The book by Parisi and Ball, presents an important discussion on the difficulty of the alternative fusion reactions p-11B, D-D and D-3He. Their discussion is based on the increased energy loss from bremsstrahlung (breaking radiation) in these reactions. The temperature required for these alternative reactions is much higher than for the D-T reaction and this leads to higher losses from bremsstrahlung. A further, even bigger problem for p-11B, is that the boron atom has five electrons which add to the plasma for only one fusion nucleus giving even more bremsstrahlung. The table below shows the calculations of the ratio of fusion power to losses from bremsstrahlung (pfusion/pbrem) indicating that the alternatives have much bigger power losses than D-T and that p-11B even has a net loss of power.

Among the new fusion companies 15/33 are based on magnetic confinement fusion (MCF), with three of the biggest seven companies proposing MCF approaches based on the use of high temperature superconductors (HTS). These companies have projects with compact conventional tokamaks, spherical tokamaks and stellarators. The innovations in these new developments address the problems of mainstream fusion discussed in the pages: Maintenance, Breakdowns and Availability and Pharaonic Size and Byzantine Complexity, but not others because the projects use D-T fuel.

Commonwealth Fusion Systems (CFS), which is the largest private fusion company with $2+ billion funding and 300+ employees, is building a compact Tokamak using HTS. Their approach benefits from the experience of mainstream fusion, adding innovations which could well solve many of the difficulties.

The design is described in the paper: ARC: A compact, high-field, fusion nuclear science facility and demonstration power plant with demountable magnets. The ARC reactor will be a tokamak reactor and produce about 200 MW of electricity. The machine will have rare earth barium copper oxide superconducting toroidal field coils, which have joints to enable disassembly. ARC will be about half the physical size of ITER but with comparable fusion power. A further innovation of ARC compared to ITER, is the breeder blanket which will be outside the vacuum vessel. This fully liquid blanket is a molten salt where the liquid is a continuously recycled, offering significant improvement on the tritium breeder ratio compared to other designs. 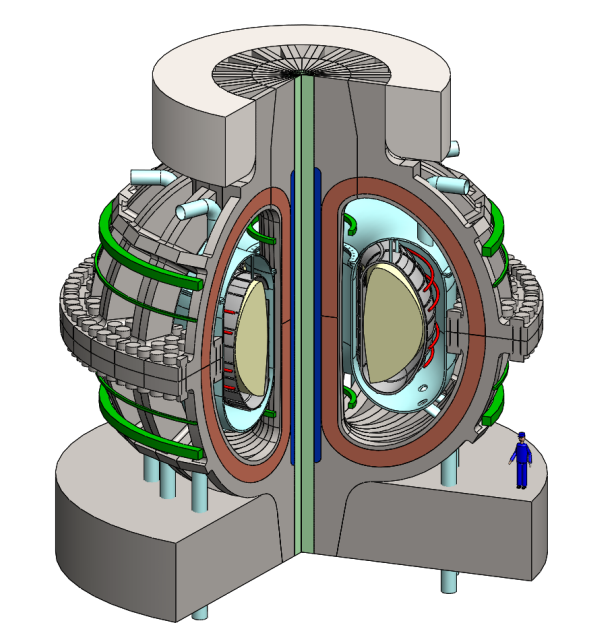 The joints in the magnet allow a vastly easier maintenance and component replacement regime compared to the ITER /DEMO plans. This innovation, combined with the smaller size could enable a much faster and less costly development cycle. 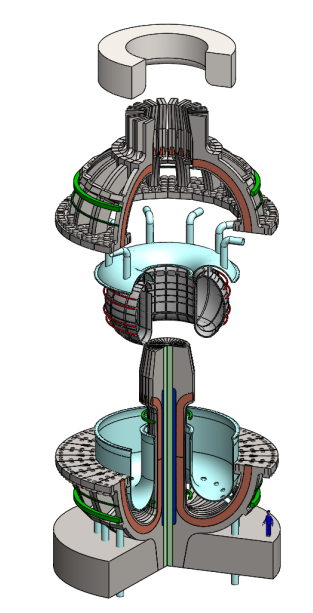 CFS plans for a first smaller reactor, SPARC, operational in 2025 and the full ARC in the early 2030s. The use of D-T fuel means that ARC will have initial tritium supply problems, as all other fusion reactors operating after 2030, although this is denied in the CFS publicity.

The Spherical Tokamak (ST) concept has been studied for many decades but now has revived interest with two of the big-seven private fusion companies: Tokamak Energy in the UK and ENN in China, as well as the publicly funded STEP project in the UK. The figure below illustrates the different plasma aspect ratio of an ST compared to a conventional tokamak (CT). 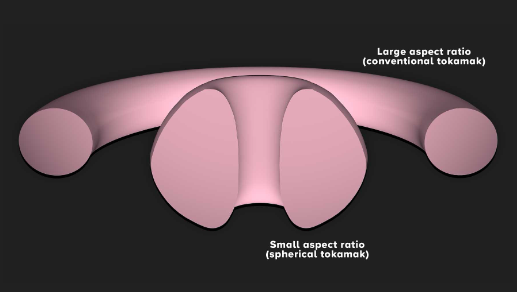 Tokamak Energy (TE) was launched in 2009 and now has $0.25 billion funding and 190 employees. TE has built a desktop ST prototype, ST25, which operated in 2012. Another prototype ST40, of 1m scale, operated in early 2022 and now is being upgraded. Despite minimal available details on designs and results Tokamak Energy advertises a pilot power plant in the early 2030s.

The interest of spherical tokamaks is that the modified plasma aspect ratio gives improved plasma confinement parameters compared to that of a conventional tokamak. Unfortunately, the changed aspect ratio presents engineering difficulties for the ST because of the smaller central bore diameter which leads to several practical problems. In a conventional tokamak, the central bore contains neutron shielding, breeder blanket, the toroidal magnet coils and the central solenoid. A spherical tokamak design must either eliminate these elements or make them much thinner.

As well as the operational W7-X stellarator in Germany, 4 of the private fusion companies use the stellarator concept, the biggest being Renaissance Fusion in France.

Inertial confinement fusion (ICF) has been pursued in parallel with MCF since the 1950s and since their invention in the 1960s, lasers have been used for this. Most of the funding for inertial fusion comes from defence budgets because of the close relationship to weapons technologies. The main ICF activities are now at the National Ignition Facility (NIF) at the Lawrence Livermore Laboratory in the USA. In France the Laser Mégajoule facility is part of the defence division of the CEA. Eight of the smaller private fusion companies have inertial confinement activities. 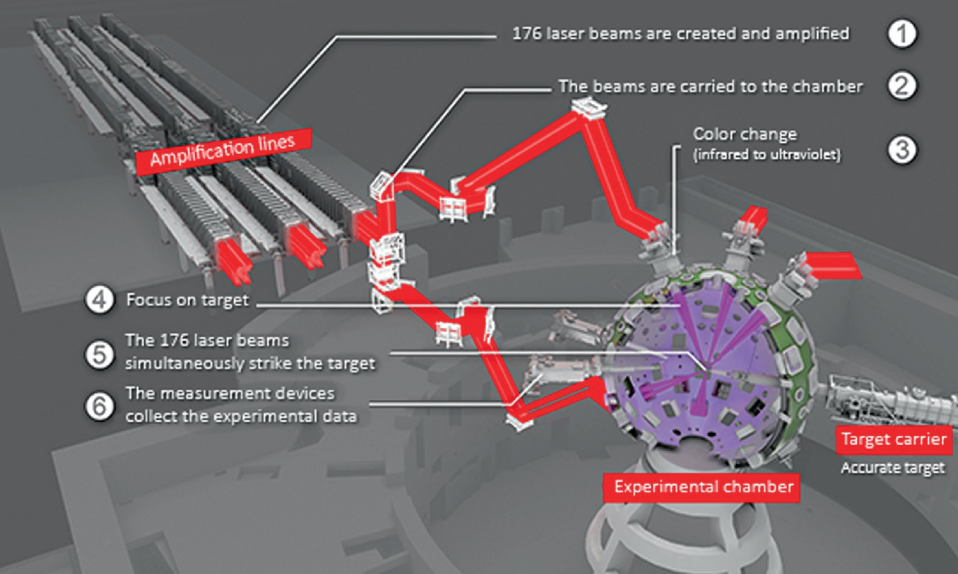 There has been much recent interest in inertial confinement fusion because of a success at NIF in 2021, Burning plasma achieved in inertial fusion. The figure below shows the "indirect-drive" technique pursued for this experiment.

Schematic of the indirect-drive inertial confinement approach to fusion. Laser beams enter hohlraum through entrance holes. At centre of hohlraum, capsule is bathed in X-rays, which ablates outer surface of capsule. The pressure generated drives the capsule inward upon itself, compressing and heating fusion fuel.

This paper, and several others, celebrate a single inertial fusion shot that produced 1.3 MegaJoule of energy on 8 Aug 2021 which was eight times the previous record. Although a reason for optimism, a commercial power plant with this technique is a very long way off. ICF can operate about one fusion shot per day while a power plant would need about 10 shots per second to be economic.

The magneto-inertial fusion technique uses both magnetic confinement and inertial implosion to achieve fusion. It is employed by two of the big-seven fusion companies: General Fusion and Helion.

General Fusion is one of the older private fusion companies, formed in 2002, with funding of $300+ million and 200+ employees. Their method is very complicated, with a Magnetized Target technique which is between MCF and ICF in method as well as in plasma density and in confinement time, as shown in the table below from the book of Parisi & Ball.

The review paper by Daniel Cleary, explains the General Fusion method. The machine has a first part consisting of a plasma injector that forms Field Reversed Configurations (FRC) and fires them out at speed into the centre of the second part, a spherical reaction chamber. The chamber contains some liquid lithium which is spun up to coat the inner wall. This serves several purposes: it absorbs the high-energy neutrons produced in fusion reactions, preventing them from damaging the reactor structure; it absorbs the energy of the neutrons and carries it out to be harvested and converted into electricity; and the neutrons convert some of the lithium into tritium, which can be collected and used as fuel for the reaction. The third part of the system provides the compression which implodes the FRC once it reaches the centre of the chamber. It is comprised of up to 400 pneumatic pistons positioned around the reaction chamber like spines on a sea urchin. These slam down in unison to produce a converging shock wave in the chamber centred on the FRC. As with ICF this technique has a long progression in performance. At present the General Fusion prototypes will be able to perform around one shot per day but a working power plant would need to perform one per second. Nevertheless, the company advertise commercial fusion in about 10 years. 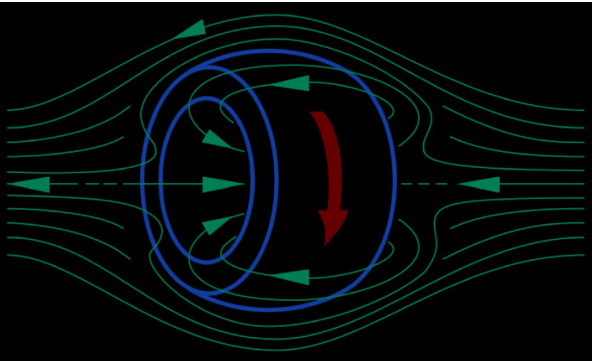 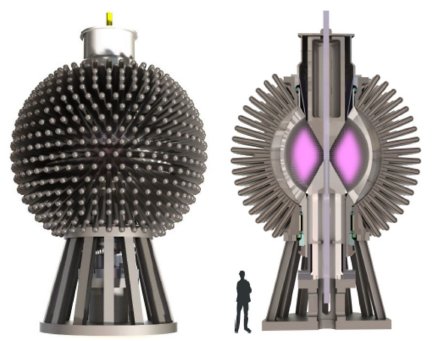 The alternative fuels discussed above, have the motivation to avoid neutron radiation damage as well as avoiding the tritium shortage problem.  Two of these alternatives are pursued by private fusion companies.

The table below compares these reactions with the conventional D-T reaction, showing that the threshold temperature (required to make the reactions possible) are for D-3He and p-11B, 4 and 9 times higher, while the interaction cross-sections (related to the probability for the reaction to occur), are 50 and 400 times lower, showing these fusion reactions are much more difficult to use.

The reaction with fuel D - 3He allows parasitic D - D reactions which produce neutrons and so does not completely avoid the radiation damage problem. Also, 3He is very rare on Earth, with all current supplies actually coming from the decay of tritium, so it does not solve the tritium supply problem in a simple way. Boron is common and so does avoid the supply problem, however it has the big threshold and cross-section difficulties plus the bremsstrahlung problem discussed above.

A feature of aneutronic fusion which is advertised in propaganda as an advantage but which in reality seems more like a disadvantage, is that the heat comes out largely in charged particles from the fusion reactions. The charged particles can, in principle, be directly converted into energy while in the conventional fusion heat extractions which is indirect, with the neutrons first interacting with material and the heat then being transmitted to a turbine via a fluid. The snag is that no direct heat extraction method has ever been demonstrated to work. A number of "direct" extraction possibilities exist, some more direct than others. One method is electrostatic which involves five separate steps: selective leakage; expansion; electron separation; deceleration and collection. The figure below illustrates a possible concept which has never been developed. 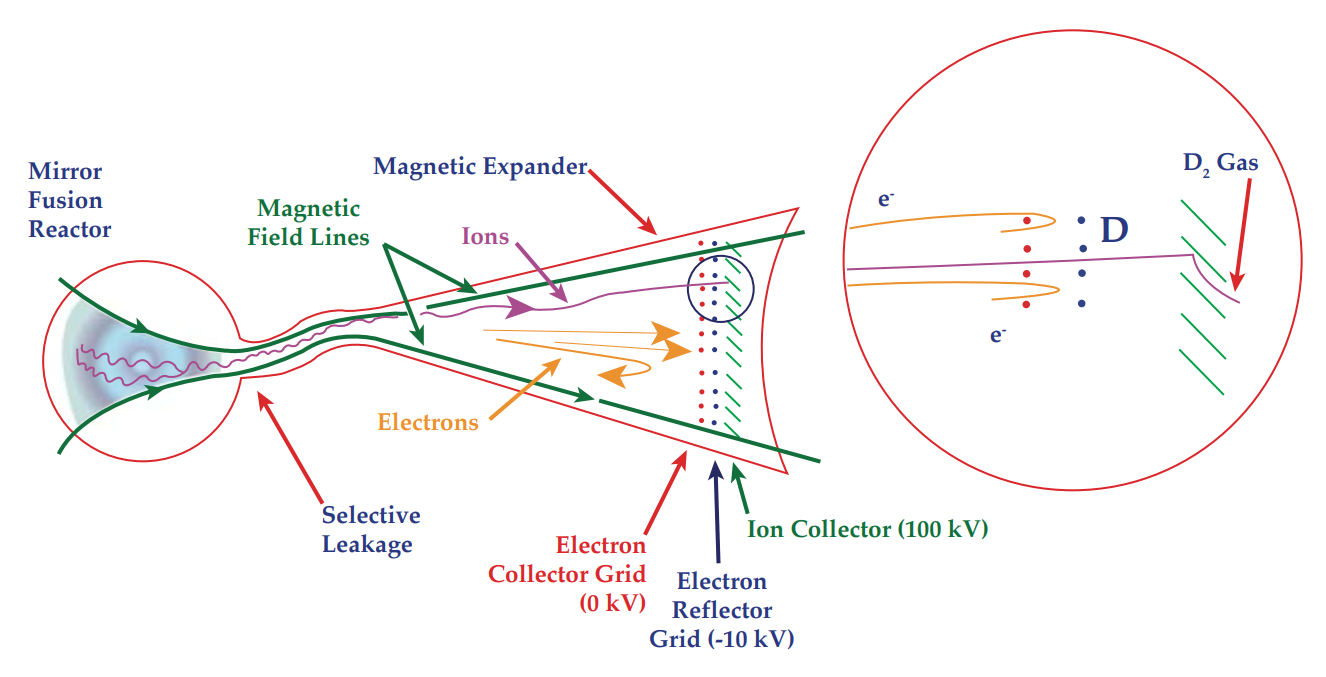 TAE Technologies is the second largest fusion company with $1+ billion funding and ~400 employees. It was founded on the basis of using p-11B fuel. Their entry in the FIA report says, "TAE configuration can accommodate all available fusion fuels", also the company changed its original name of Tri Alpha Energy, which evokes the p-11B reactions to, TAE Technologies, which emphasises this less, so there are indications the company may be changing strategy away from the aneutronic reaction.

The TAE fusion concept involves accelerating two rings of plasma into collision in a central chamber where large amounts of external energy are injected to produce fusion conditions.

Illustration of the TAE the 5th prototype device, Norman