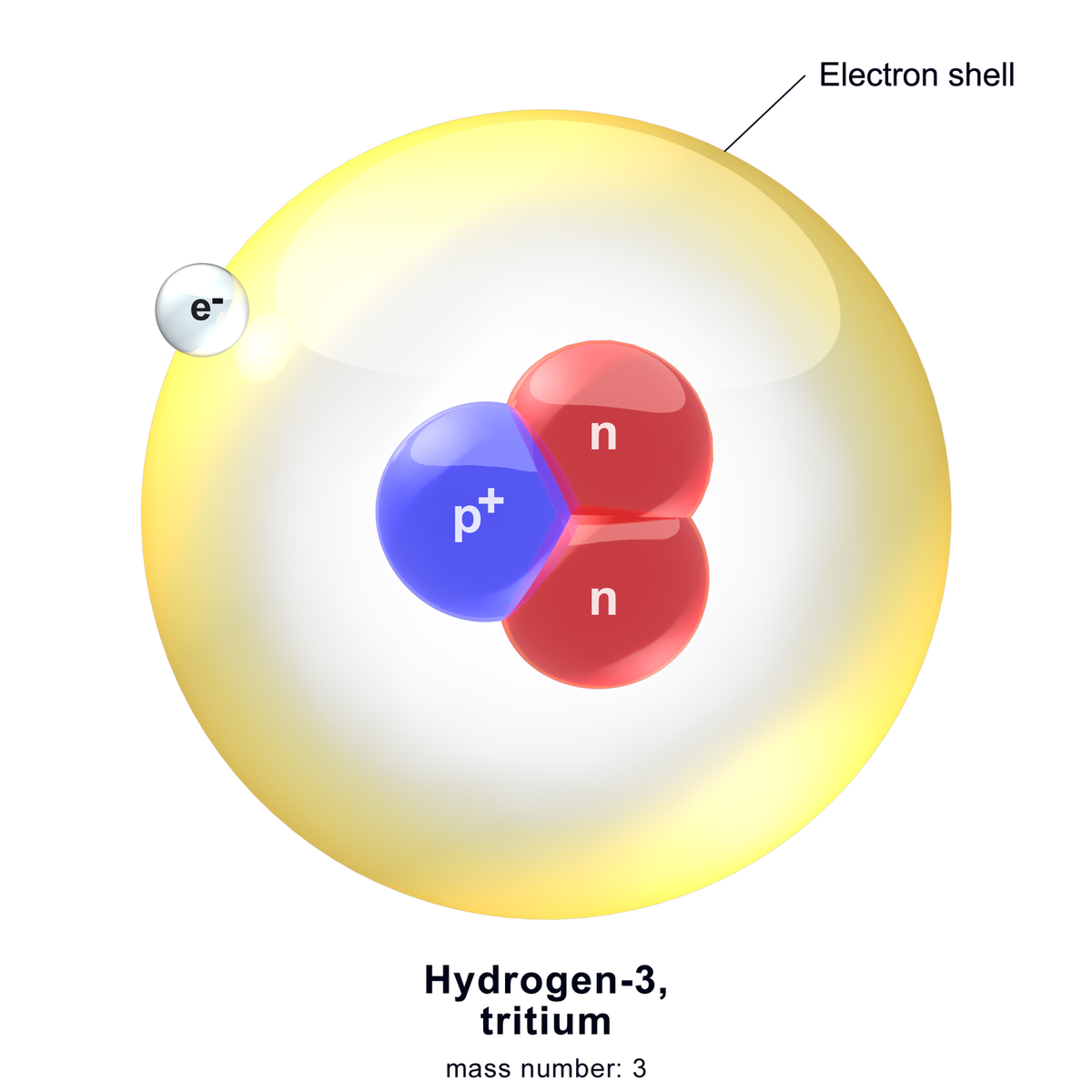 The supply of tritium fuel is an enormous problem for mainstream fusion reactors, perhaps even a show-stopper. Surprisingly, fusion advocates often say that the fuel is abundant and an advantage of fusion. In reality, the opposite is the case for tritium.

A single fusion reactor would consume about 50 kg/year of tritium but, currently, only about 0.5 kg/year is produced worldwide. In all the oceans of the world there is about 30 kg of tritium most of which is has come from the atmospheric nuclear tests in the 1950s and 1960s and is decaying with a half-life of 12 years (5% per year). Due to the impossibility of external supply, designs for fusion reactors involve breeder systems to generate tritium from the neutrons emitted in the D-T fusion reactions, in components called Breeder Blanket. Further, because only a few percent of the injected tritium is burnt in the reactor, the un-burnt fuel must be recuperated, purified and re-injected.

The subject of tritium self-sufficiency is studied in detail in: Abdou et al. (2021). The tritium fuel cycle of a fusion reactor is shown schematically below, showing the different pathways taken by tritium in the reactor. 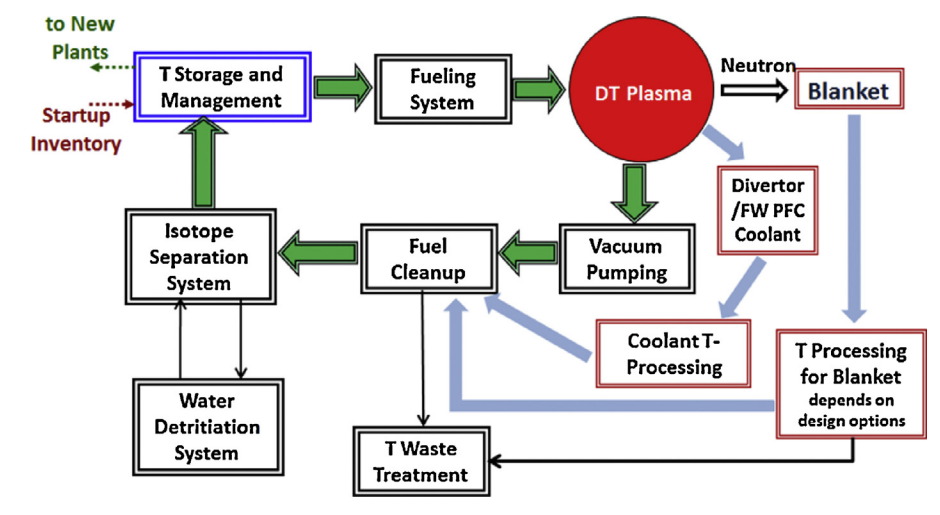 The tritium has four routes:

In the reference above, a dynamic model has been developed to evaluate the requirement to achieve tritium self-sufficiency. The model considers several parameter, including:

The figure shows the required Tritium Breeding Ratio (TBR) for various tritium processing time, tp , in the plasma exhaust, as a function of ηf fb . 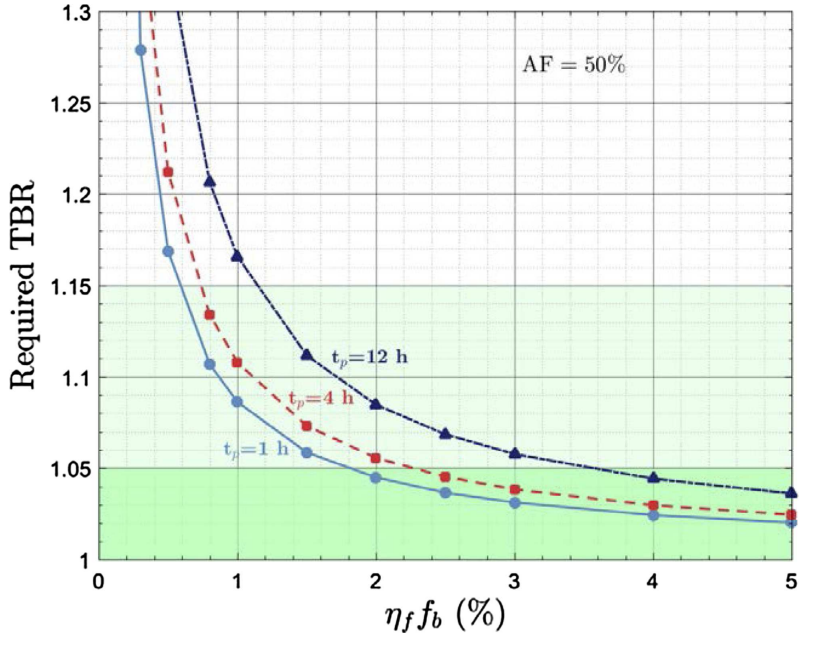 The estimates of TBR possible with existing technologies are in the range 1.05 - 1.15, and indicated by the green bands in the plot. The conclusion is that with the ITER "state-of-the-art" parameters (fueling efficiency, ηf <25%; plasma burn fraction, fb=0.35%; tp=several hours) , self-sufficiency is not possible and much higher values of these parameters are needed beyond what seems currently possible.

The conclusion of the Abdou et al paper is that tritium self-sufficiency is likely not possible.

A further massive problem with the tritium supply is the initial start-up inventory, equally addressed in Abdou et al. The current world stock of tritium is around 25kg which will increase slowly until the CANDU fission reactors reach the end of their lives. From then on, the radioactive tritium will decay away at a rate of 5% per year. When the ITER project starts operation it will take the major fraction of the world stock. The figure below shows an estimated evolution of the world stock of tritium. 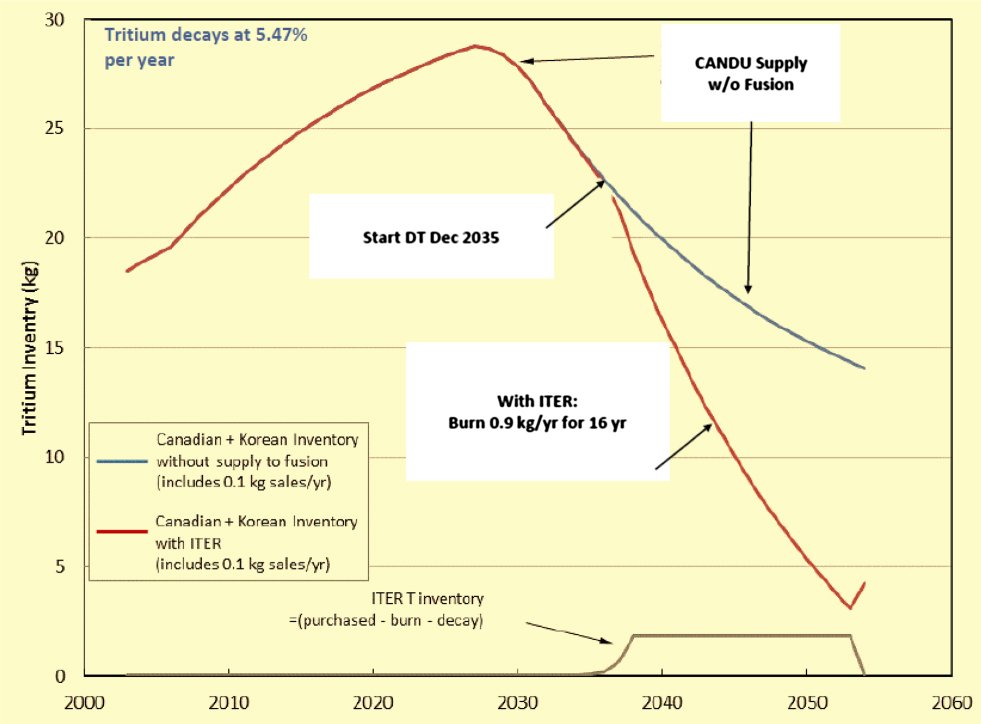 According to this estimate, around 2050 when the construction of a DEMO fusion reactor might start, world tritium supplies could be less than 5 kg. The Abdou et al paper gives an estimate for required start-up inventory for a DEMO reactor at 15 kg which likely will not exist. Any other DEMO reactors or commercial reactors will be completely impossible to supply.

This is such an essential issue that more references are given here.

Presentations of the tritium supply problem can be found in a series of article on the website of Steven Krivit at: The New Energy Times, Fusion Fuel Exposé

An article by Daniel Clery in Science : Fusion power may run out of fuel before it even gets started.