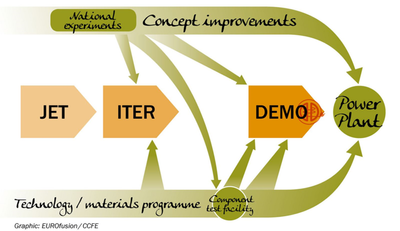 "DEMO" is planned as the first prototype fusion power plant following on from JET and ITER in the mainstream fusion technology .

With the transition from ITER to DEMO, fusion will go from a science - driven, lab -
based exercise to an industry - driven and technology -driven programme. A key criterion for DEMO is the production of electricity, although not at the price and the quantities of commercial power plants.

There are several DEMO - like projects in different around the world .

This website uses the European Union DEMO project as reference and this is sometimes referred to at EU-DEMO or just DEMO?