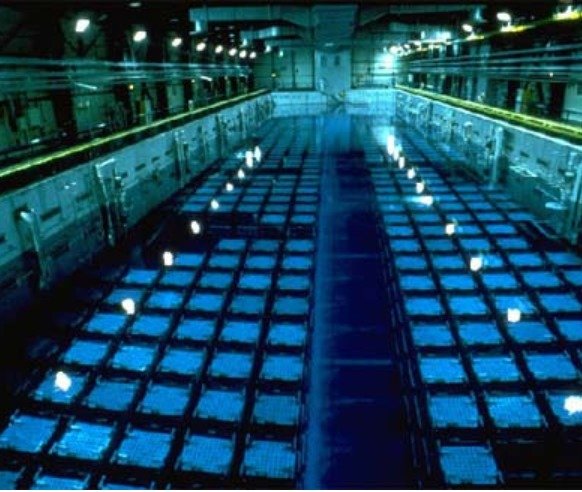 One of the biggest objections of the general public to nuclear power is the disposal of radioactive waste. It is widely believed that the danger from radioactive waste will be the same in tens of thousands of years in the future as it is now coming from a lack of understanding of radioisotopes decay.

Nuclear power plant operation, maintenance and decommissioning produces a wide variety of radioactive waste. The majority (90%) of the waste is made up of filters, resins, valves, vinyl and fabric that has low level radioactivity and limited half life. Waste from spent fuel processing accounts for most of the remaining 10%. This highly radioactive waste has a half-life that can reach several tens of thousands of years.

Many details of nuclear waste treatment can be found on the web:

Below are short summaries of what is presented in these pages and videos.

High-level radioactive waste is primarily uranium fuel that has been used in a nuclear power reactor and is "spent," or no longer efficient in producing electricity. Spent fuel is thermally hot as well as highly radioactive and requires remote handling and shielding. Nuclear reactor fuel contains ceramic pellets of uranium-235 inside metal rods. Before these fuel rods are used, they are only slightly radioactive and may be handled without special shielding.

During the fission process, two things happen to the uranium in the fuel. First, uranium atoms split, creating the energy that is used to produce electricity. The fission creates radioactive isotopes of lighter elements such as cesium-137 and strontium-90. These isotopes, called "fission products," account for most of the heat and penetrating radiation in high-level waste. Second, some uranium atoms capture neutrons produced during fission. These atoms form heavier elements such as plutonium ("transuranic" / "actinides" in plots below). 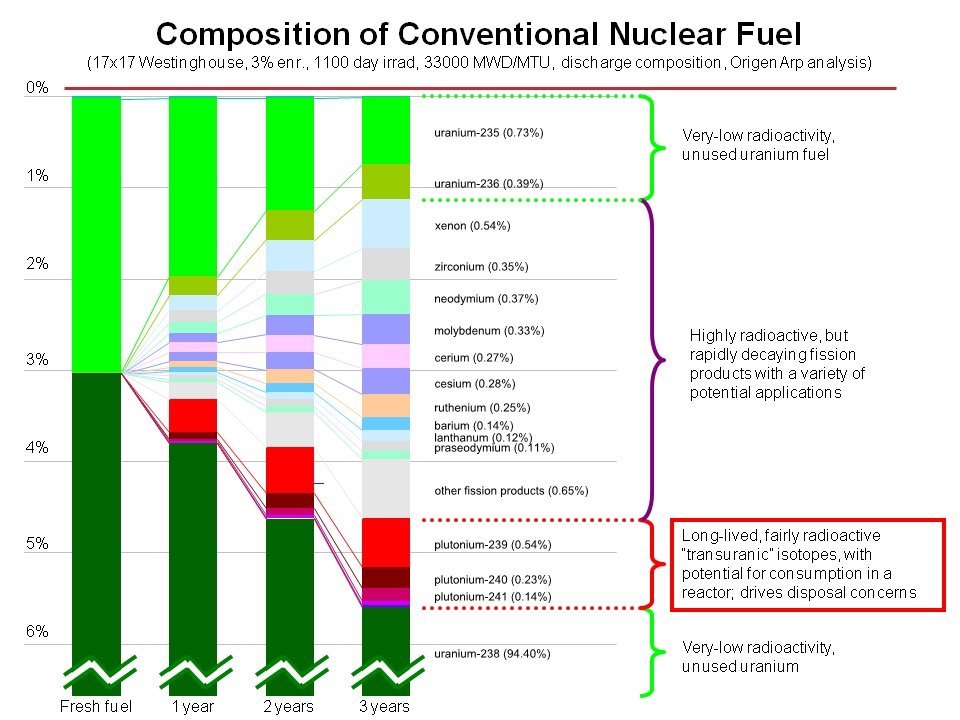 All radioactive isotopes eventually decay to harmless materials. Some isotopes decay in hours or even minutes, but others decay very slowly. Strontium-90 and cesium-137 have half-lives of about 30 years (half the radioactivity will decay in 30 years). Plutonium-239 has a half-life of 24 000 years. The plot below shows the decay in activity for typical nuclear spent fuel. 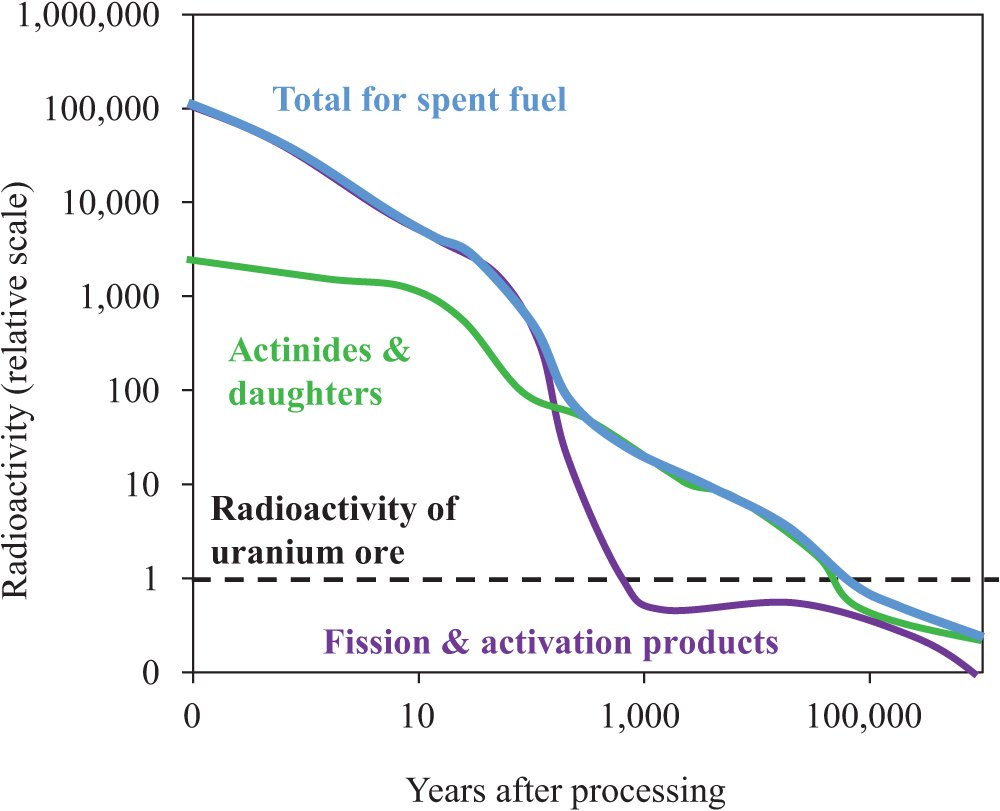 EDF strives to limit the amount of waste generated and major advances have been made in power plant design and operation to achieve this.

All waste is painstakingly sorted by radioactivity level and type:

Following processing, the remaining waste is placed in sealed containers in preparation for storage. The containers are specially adapted to the nature of the waste and the associated hazards (drums, metal boxes, concrete containers, stainless steel containers, etc.). This ensures that the radioactivity contained in the waste does not come into contact with people or the environment.

The 90% of least radioactive waste is sealed in drums, metal boxes or concrete containers. Final storage is handled at three Andra centres located in the Manche and Aube departments. The 10% of most radioactive waste is currently conditioned in stainless steel containers and placed in intermediate storage at AREVA’s La Hague plant. Given its half-life of up to several tens of thousands of years, the law provides for the containers’ transfer to a deep geological disposal facility which is under construction with completion date 2025. Waste will be stored in cells excavated at a depth of 500 metres in a stable geological environment surrounded by impermeable argillaceous rock. A separate repository is currently being designed to store power plant decommissioning waste.

In the UK, where legislation is different, EDF works with the Nuclear Decommissioning Authority, which is responsible for waste storage. Low and intermediate level waste is retained in dedicated facilities within the power plants and ultimately compacted, incinerated or recycled. High-level waste is currently vitrified and placed in intermediate storage at the Sellafield reprocessing plant. The British government took a decision in 2006 to ultimately store it in deep geological repositories.