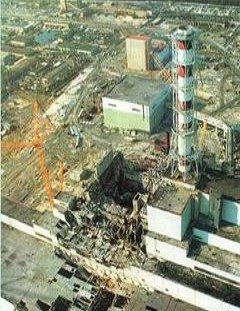 The incident in 1979 at the Three Mile Island, situated on a thin strip of land in the middle of the Susquehanna River in Pennsylvania USA, was the first nuclear accident to have large scale public attention.

The reactor had only been in operation for one year and was operating normally when a pump failure stopped the cooling system functioning. The reactor overheated leading to a partial core meltdown, destroying the reactor and leading to a leak of radioactive gas. No subsequent heath studies found any evidence for health effects caused by the incident.

The media made a story about bungled operations and botched safety procedures which caused massive public concern leading to 140 000 people fleeing their homes. At the time of the incident the US had 140 operating nuclear reactors but afterwards all orders for new plants were halted.

The Chernobyl disaster occurred at a nuclear plant in the Ukraine near the Belarus border in 1986. Of the three incidents it was by far the most serious in terms of deaths, radiation contamination and damage to the reputation of nuclear power.

The incident happened during an experiment to test if the reactor could be safely shut down if its cooling system lost external power. For the experiment, the operators deliberately turned off the cooling system, expecting to be able to control the reactor if the test failed. Unfortunately, when the reactor started to overheat the situation developed too rapidly to control and the reactor exploded. Dozens of fires broke out and massive amounts of radioactive material escaped into the surrounding area and the atmosphere. Of the order of 100 000 people were evacuated form the surrounding region, part of which became a permanent exclusion zone.

Thirty reactor operators and local firefighters died immediately or in the weeks following the accident. Number for the subsequent deaths from the radiation released into the environment are very uncertain with estimate between 100 and 10000.

The seriousness of the accident caused major changes in safety regulations for nuclear reactors worldwide and almost brought nuclear construction to a halt.

In 2011, the Fukushima Daiichi nuclear plant was stuck by a tsunami wave 15 m high which washed over the seawall and through the plant. The reactors were at first unharmed but the power from the grid was cut and the backup diesel generators were flooded. With no pumps operation the cooling system, one of the reactors quickly overheated. After a few hours the fuel began to melt. To avoid an explosion, engineers vented hydrogen and other gases which were building up in the containment vessel. Two other reactors on the site followed the same destruction as the first.

The population fled the area driven by panic with 150 000 eventually leaving the area. The radioactivity releases were only about a tenth of the Chernobyl disaster and much was blown out to sea,

Bodies of 10 000 drowned victims were scattered along the coast in the vicinity of the power plant, but there is no evidence there were any deaths caused by radiation.

Nuclear construction in Japan had not been affected by the Three Mile Island or Chernobyl accidents but this local disaster stalled nuclear development in the country.

After the experience of these accidents, it is possible for the nuclear industry to learn from past mistakes and implement changes. This process happens in all new technologies, aircraft being a perfect example.