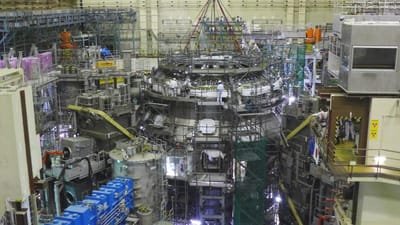 It is an advanced tokamak, including a D-shaped plasma cross-section and active feedback control. JT-60 began operations in 1985 and over the next two decades underwent two major modifications during this time, JT-60A, and then JT-60U. These changes resulted in significant improvements in plasma performance. As of 2018, JT-60 currently holds the record for the highest value of the fusion triple product achieved: 1.77×1028 K·s·m−3 = 1.53×1021 keV·s·m−3.To date, and has the world record for the hottest ion temperature ever achieved (522 million °C).

The latest upgrade for JT-60 was by adding superconducting coils to become JT-60SA
Construction of the tokamak began in 2013, and it was planned to produce the first plasma  in 2020. Assembly was completed in the spring of 2020, and in March 2021 it reached its full design toroidal field successfully, with a current of 25.7kA. Unfortunately  in March 2021 the poloidal field coils suffered a short circuit leading to a lengthy investigation and repair. The magnet problems and repairs are described at: JT-60 SA repairs