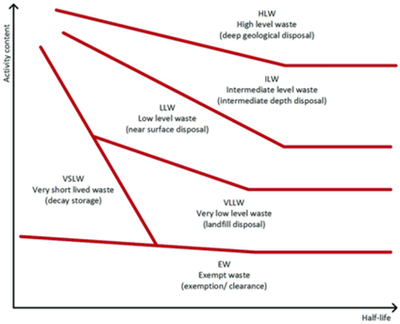 This radioactive waste is handled in different ways depending on the intensity of the emitted radiation to ensure the safety of the general public. For this, the waste is assigned a classification which varies somewhat between different countries.

Exempt waste (EW)
Waste that meets the criteria for clearance, exemption or exclusion from regulatory control for radiation protection purposes.

Very short lived waste (VSLW)
Waste that can be stored for decay over a limited period of up to a few years and subsequently cleared from regulatory control according to arrangements approved by the regulatory body, for uncontrolled disposal, use or discharge.

Very low level waste (VLLW)
Waste that does not necessarily meet the criteria of EW, but that does
not need a high level of containment and isolation and, therefore, is suitable for disposal in near
surface landfill type facilities with limited regulatory control.

Low level waste (LLW)
Waste that is above clearance levels, but with limited amounts of long lived radionuclides. Such waste requires robust isolation and containment for periods of up to a few hundred years and is suitable for disposal in engineered near surface facilities.

Intermediate level waste (ILW)
Waste that, because of its content, particularly of long lived radionuclides, requires a greater degree of containment and isolation than that provided by near surface disposal. However, ILW needs no provision, or only limited provision, for heat dissipation during its storage and disposal.

High level waste (HLW)
Waste with levels of activity concentration high enough to generate significant quantities of heat by the radioactive decay process or waste with large amounts of long lived radionuclides that need to be considered in the design of a disposal facility for such waste.
Disposal in deep, stable geological formations, usually several hundred metres or more below the
surface, is the generally recognized option for disposal of HLW.

Further details on radioactive waste are give on the page: Essential of Nuclear Physics