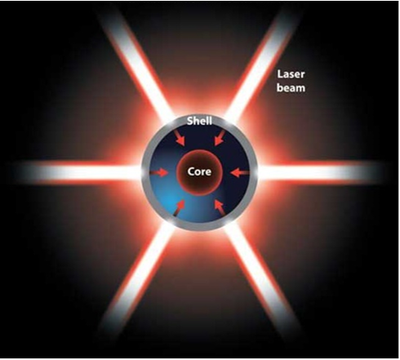 ICF produces fusion by compressing and heating targets filled with fuel. In modern machines, the targets are small spherical pellets about the size of a pinhead typically containing a mixture of about 10milligrams of deuterium and tritium. To compress and heat the fuel, energy is deposited in the outer layer of the target using high-energy beams of light, electrons, or ions, although almost all ICF devices as of 2020 used light lasers.

The beams heat the outer layer, which explodes outward. This produces a reaction force against the remainder of the target, which accelerates it inwards and compresses the fuel. This process also creates shock waves that travel inward through the target. Sufficiently powerful shock waves can compress and heat the fuel at the centre such that fusion occurs.

ICF started in military programs and civil programs began in the 1970s.
For many decades the technique was found to be difficult and only recently has it met with successes The largest operational ICF experiment is the National Ignition facility (NIF) in the US. In 2021, a test shot reached 70% of the energy put into it, slightly besting the best results for the magnetic machines set in the 1990s

Some details on Inertial Confinement Fusion are given on the page: ​Alternative Technologies​​​