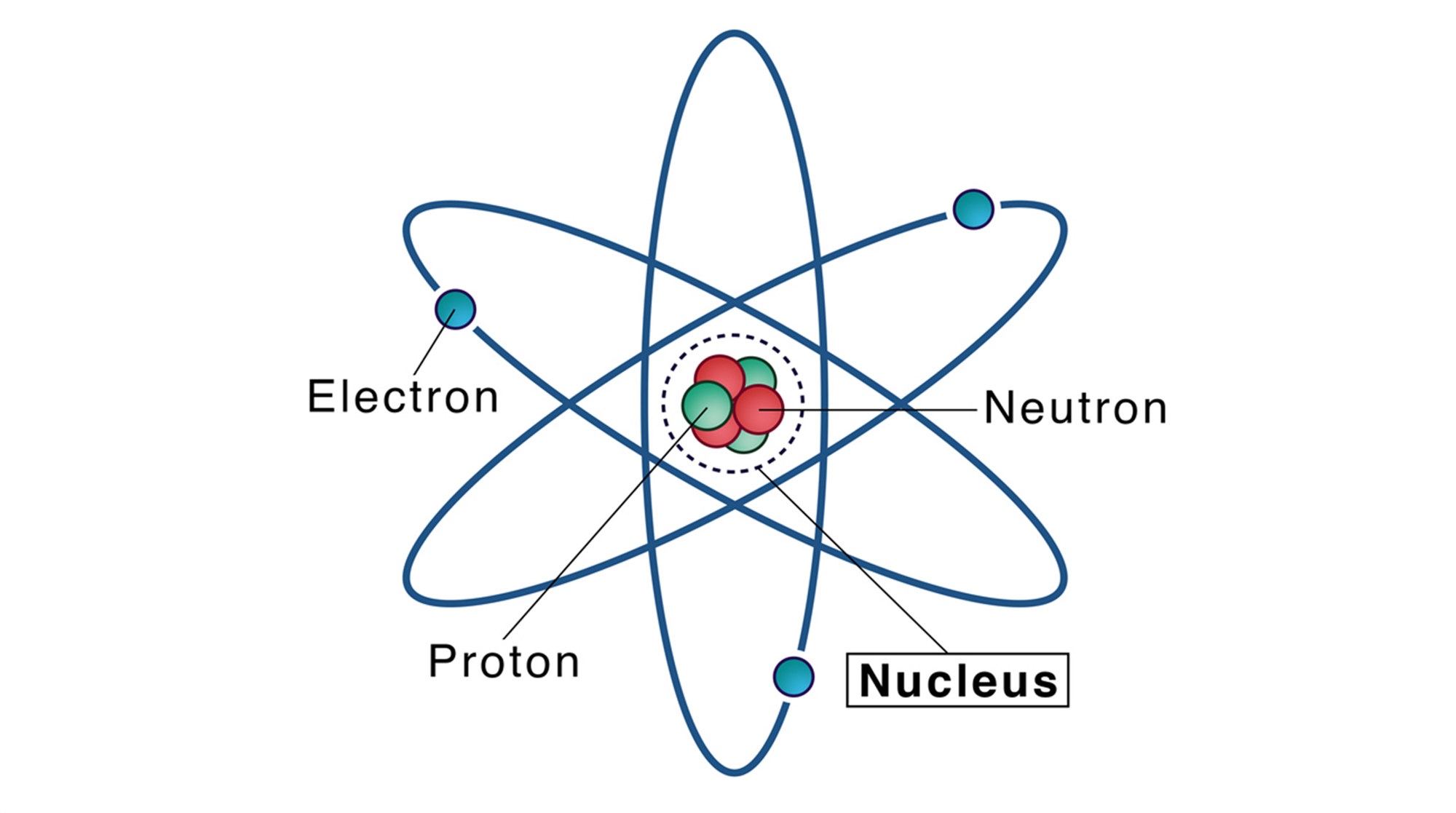 The schematic below indicates the structure of an atom consisting of orbiting electrons and a central nucleus which contains of a certain number of protons and neutrons. Each chemical element is characterised by the number of protons in the nucleus, and this leads to the chemical properties of the element. 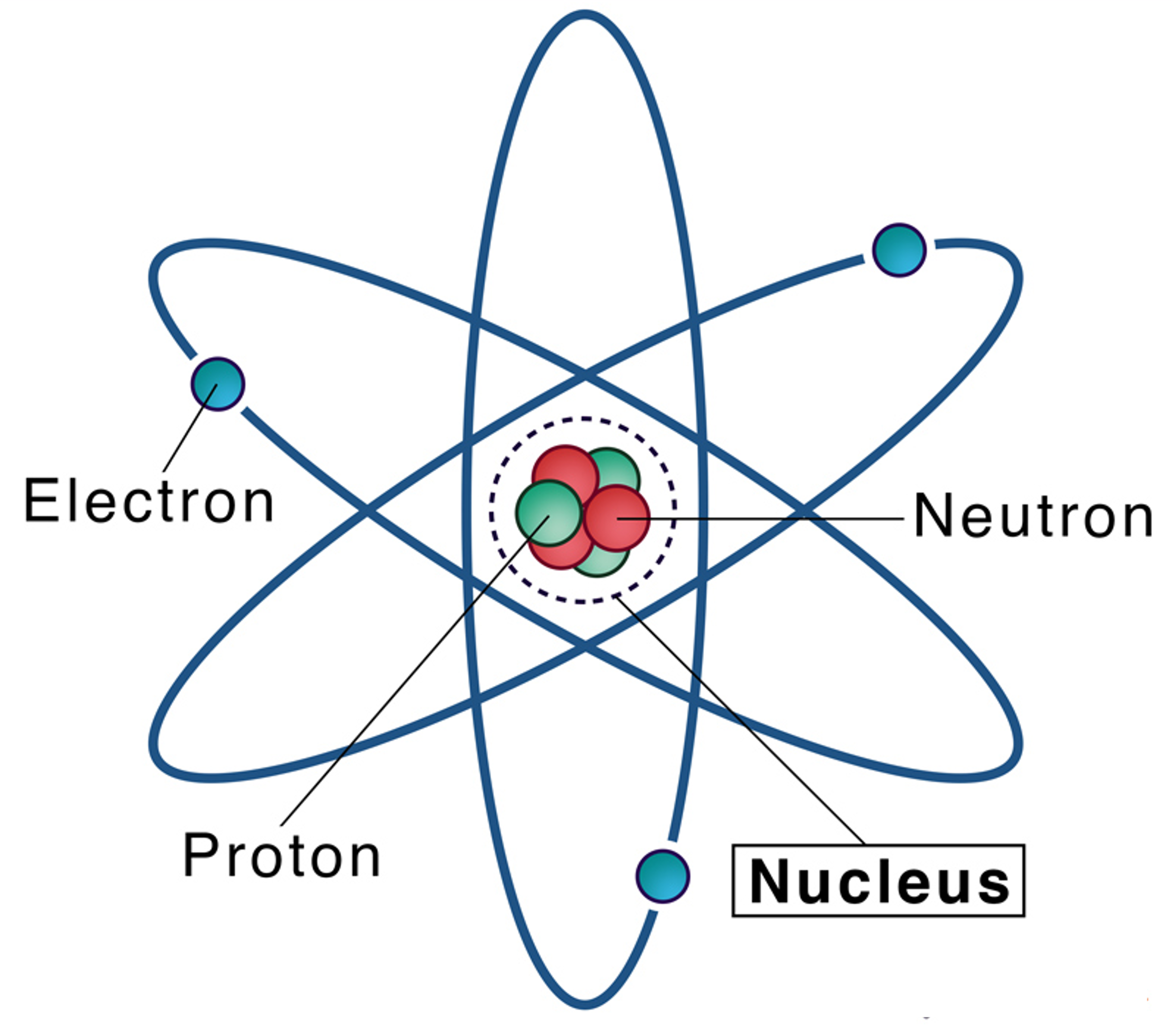 Isotopes of hydrogen. The ordinary isotope of hydrogen is sometimes referred to as protonium.

The plot below indicates, in grey, the combinations of protons and neutrons which make stable isotopes for hydrogen, helium and lithium. 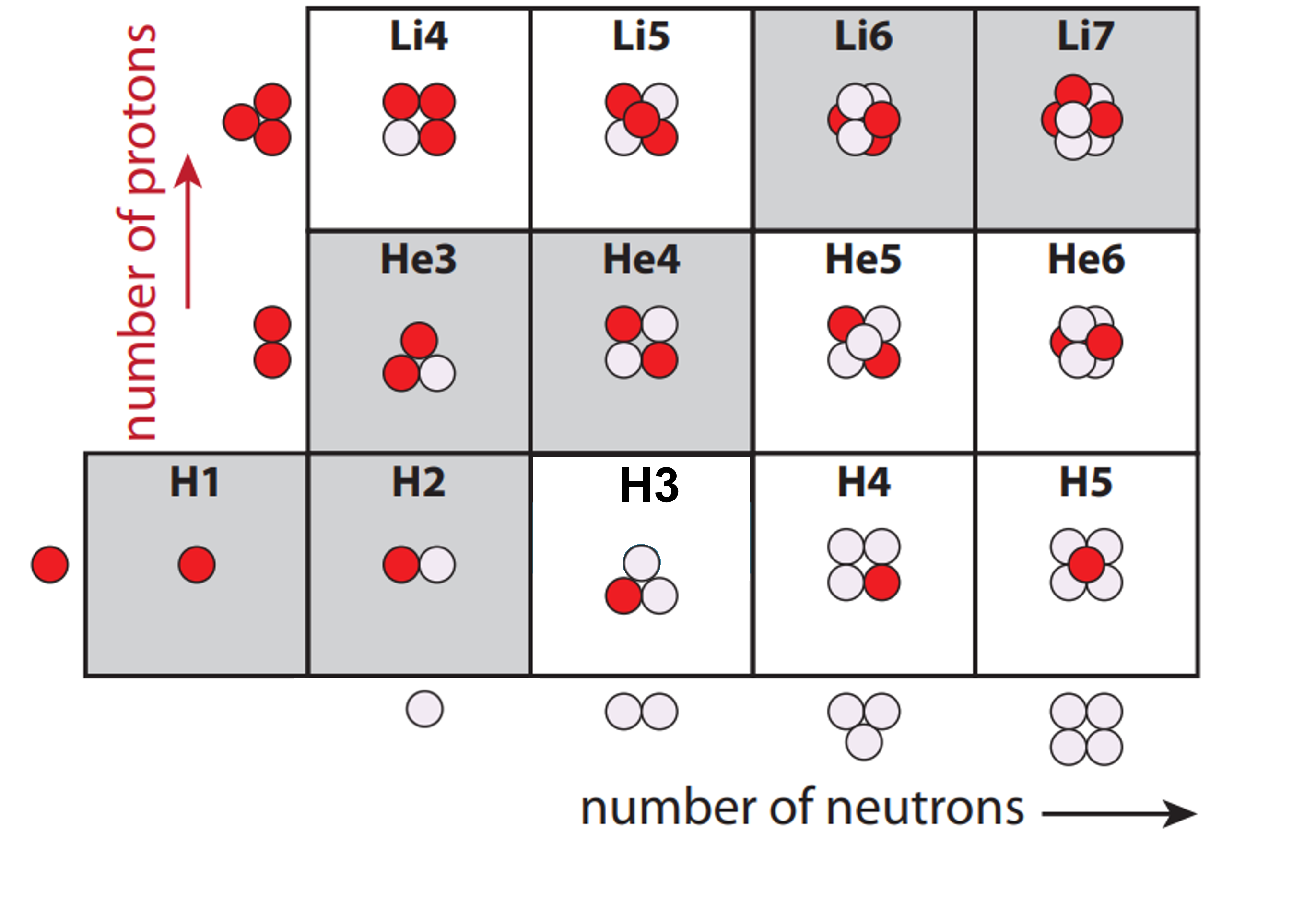 Schematic of the numbers of protons and neutrons in the nucleus of example isotopes. Grey boxes show stable isotopes. For hydrogen H1 and H2 (deuterium) are stable while H3 (tritium) is unstable with a half-life of 12 years.

Different notations of isotopes are used: Helium-3, He3, 3He or 32He as explained below. 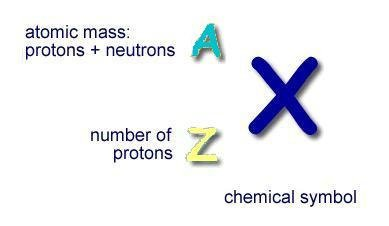 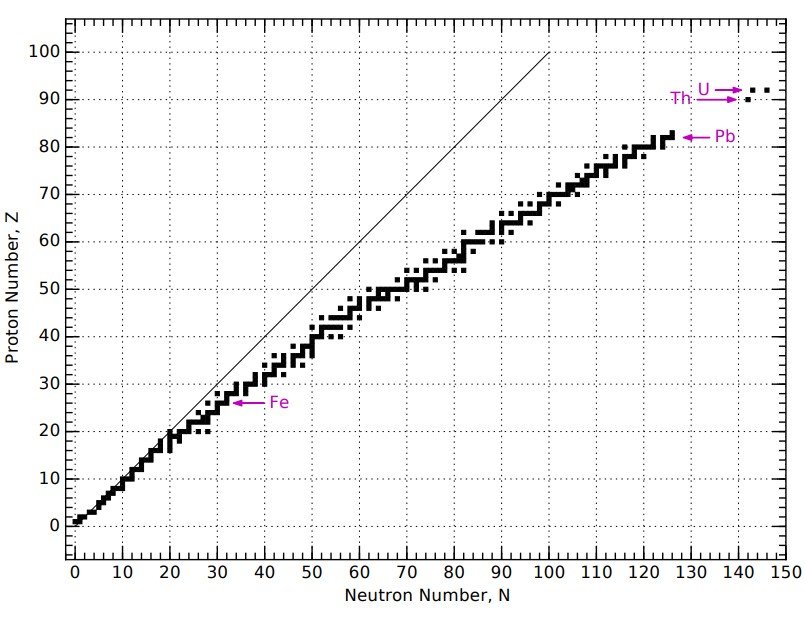 The next two plots show blow-ups of the ends of the chart of isotopes indicating both stable and unstable isotopes. These detailed plots are presented as examples of the complexity of isotopes which must be understood to properly appreciate nuclear power. At the top of the first plot, the line of carbon can be seen. For carbon there are two stable isotopes C12 (12C) with 6 protons and 6 neutrons and C13 with 6 protons and 7 neutrons. Naturally occurring carbon consist of 99% C12 and 1% C13. The isotope C14 with 8 neutrons is unstable with a long half-life of 5715 years and the isotope C11 with 5 neutrons is unstable with a short half-life of 20 minutes. C14 is the isotope which is used for carbon dating (Radiocarbon dating) which works because the long half-life is similar to historic timescales. In the middle of the second plot is the line for uranium. The isotope U238 is nearly stable with a half-life which is very long of the order of the age of the Earth. The isotope U235 is also nearly stable with a half-life of 700 million years; other isotopes have shorter half-lives. The proportions of naturally occurring uranium are in the proportions U238 99% and U235 1%.

For unstable isotopes their lifetime is a vital parameter and this is usually quantified by the half-life, which is the time for half the quantity of the isotope to decay away to a different isotope. The figure below illustrates graphically the exponential form of the decay which gives rapid reductions of radioactivity at short times and then less rapid at longer times. 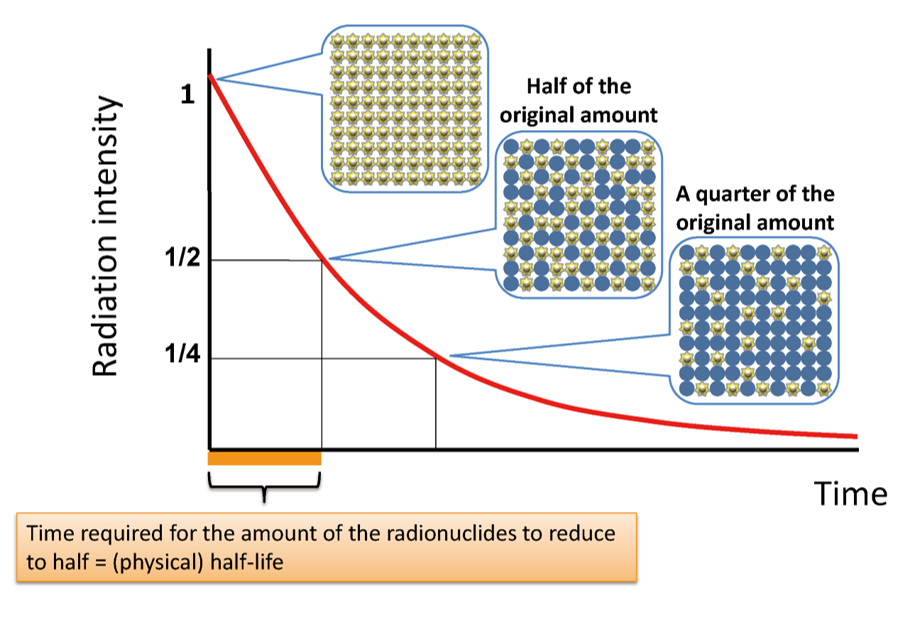 The disintegration of nuclei can take place in different ways as shown in the figure below. These decay reactions range from the emission of an alpha particle to fission, splitting the nucleus into two parts, These decay modes leave one or more heavy nucleus plus light or zero mass particles which carry away energy. These secondary particles can cause damage to human tissue and so are the origin of the concerns about radioactivity.

Another nuclear reaction, which has a major impact on the materials in nuclear reactors, is that of neutron activation. In this reaction, illustrated in the figure below, an incident neutron is absorbed by a nucleus which then undergoes a sequence of relaxation processes, passing through unstable states which decay. The half-lives of the unstable isotopes in these decay chains define the level of radioactivity in waste from nuclear facilities.

Neutron Activation showing an example relaxation sequence. Initial absorption of a neutron in the target nucleus is followed by a chain of decays, eventually arriving at a stable isotope.

Some examples of neutron activation reactions which are important in nuclear facilities are the following:

For fission, the waste is largely from the burn-up of the fuel. The plot below gives the probability of production of isotopes, called fission products, in the disintegration of the uranium-235 fuel. The fission products have atomic masses roughly half the atomic mass of the parent uranium. They have a wide range of half-lives e.g., cesium-137 with 30 years and technetium-99 with 210000 years. Isotopes with higher masses than uranium such as plutonium are made in the fuel containers by neutron activation. Other isotopes are made by neutron activation of the reactor structures.

Distribution of atomic masses of fission products produced in 235U disintegrations. The colours indicate the isotope half-lives.

In fusion reactors the waste is mainly from the materials in reactor components which are made radioactive by intense neutron activation. The types of radioactive isotopes produced depend very much on the impurities in the metals used in the reactor construction. In the steel structures long-lived isotopes of nickel-63 (half-life 100 years), nickel-59 (76000 years) and carbon-14 (5700 years) are produced as well as many short-lived isotopes. A special problem are the impurities in the beryllium used in certain reactor components. Normal beryllium supplies have up to 100 parts per million impurities of uranium, which in the fusion reactor is activated to plutonium (24000 years) and numerous other radioactive isotopes.

Both types of nuclear waste contain a variety of unstable isotopes with a wide range of half-lives. The plot below illustrates a typical decay of fission waste. The quantity plotted is the radioactive heat emitted, in watts. It should be noted that the long-lived isotopes emit a very small amount of radiation. Decay of radiative power from fission waste after removal from reactor. The black curve is the total and the coloured curves are the contributions of dominant isotopes, with the colours indicating half-lives.  This plot has a logarithmic scale on the vertical axis to be able to display all data on a single plot.

The plot above uses a logarithmic scale on the vertical axis to present the data in a compact fashion. Unfortunately, the use of this type of scale can mask the enormous range of values on the vertical scale, which in this case vary by a factor 1010. The three plots below present exactly the same data but using linear vertical scales to make clear the rapid decay of the radioactive power emitted by the waste. In the first 100 years the radioactivity emitted is reduced by a factor 10000 and after about 500 years only very low levels of long-lived waste remain, emitting extremely low levels of power: less than 0.1 watts per kg of original uranium.

Same data as previous plot but using a linear vertical scale with different time ranges and power ranges. The linear scale emphasises the rapid decay much more clearly than the logarithmic scale above.

This decay of the isotopes in the nuclear fission waste leads to the standard procedure for nuclear waste treatment:

As shown above, after 500 years only the long-lived isotopes remain in the residual waste which will be safely buried in underground storage facilities for ever.

Radioactivity is one of the major worries of the general public concerning nuclear power, however, these concerns often indicate a lack of knowledge of radiation in nature where long-lived radioactive isotopes are common. 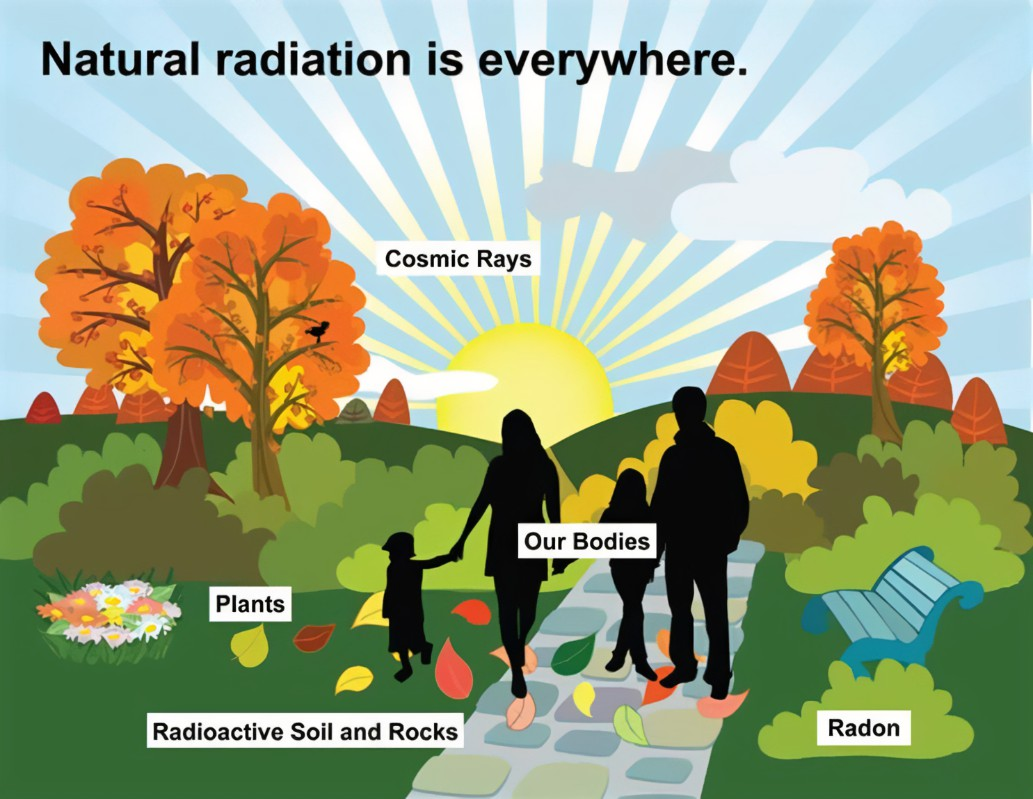 In many regions, a large part of natural radiation exposure comes from the decay of the dominant uranium isotope U238 which leads to radon with a half-life of 4 days. Radon is a gas and so can be inhaled such that its emitted radiation can attack the body from the inside making it more dangerous than other forms. 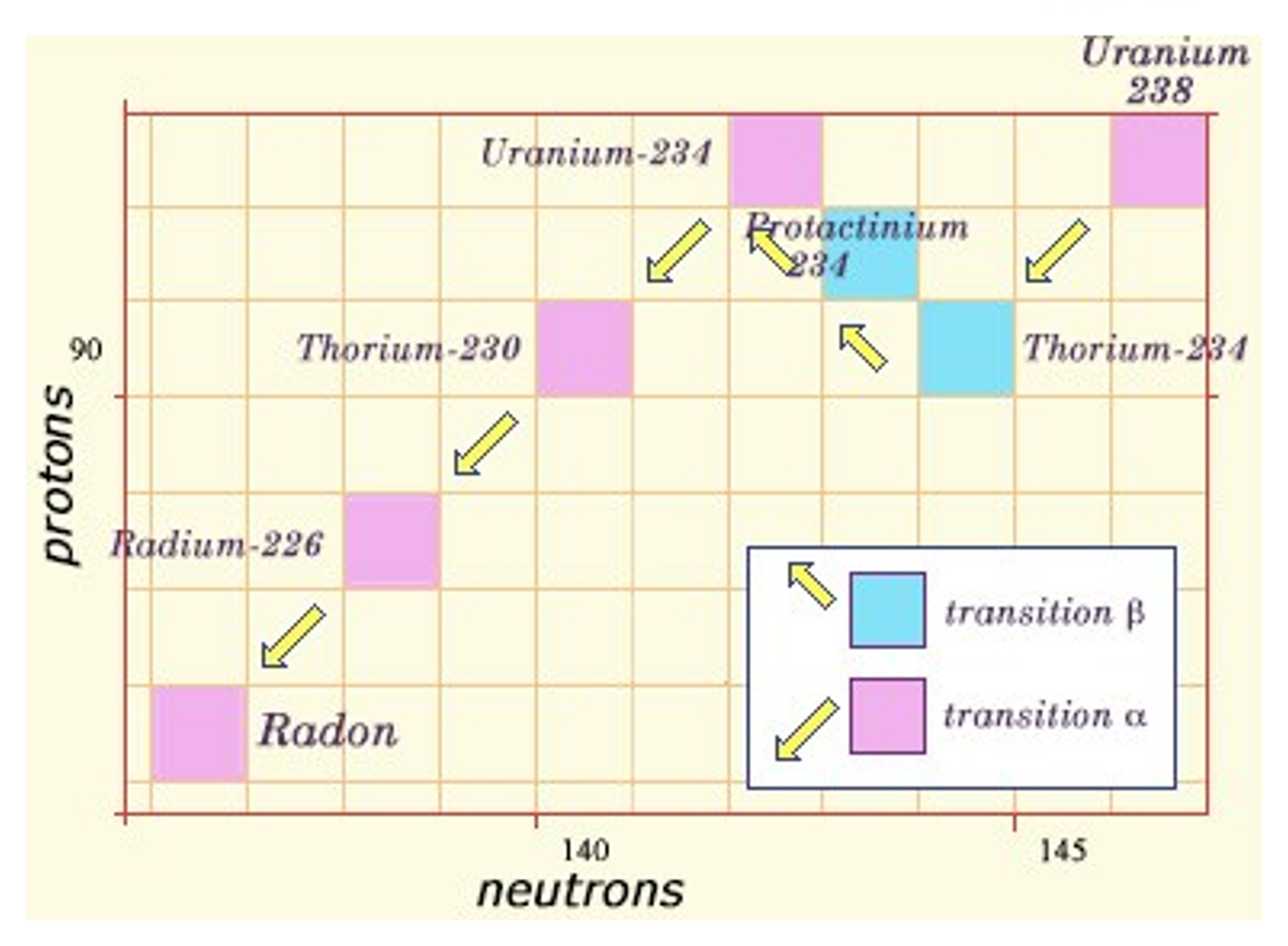 The radiation emitted in nuclear decays has different forms, designated, for historical reasons, by the first three letters of the Greek alphabet: alpha (α), beta (β) and gamma (γ). This radiation is composed of energetic particles. Alpha radiation is a light helium nucleus, beta radiation positive or negative electrons and gamma radiation high energy photons. In addition, neutrons are emitted. The alpha and beta radiation is absorbed by a small thickness of matter and in particular in the human body stopped in the skin.

The table below gives the units used to quantify radiation doses.

Units of radioactivity activity and dose on human tissue. The W factor is a radiation severity weighting term to give the effective dose on tissue. W has different values for different radiation types, approximately 1 for gamma rays; 10 for neutrons and 20 for alpha particles with additional terms for different organs.

Safety limits of radiation for workers in the industries are set at 20 mSv (millisievert = 0.001 Sv) per year. Doses of radiation above 5 Sv can be lethal.

The figure below shows radiation doses received in a typical location on Earth, split into sources. The total yearly dose is about 2.5 mSv of which the large proportion is from natural sources and about 20% from medical imaging and treatment. Only a tiny proportion comes from the fuel cycle for nuclear power and from nuclear accidents. 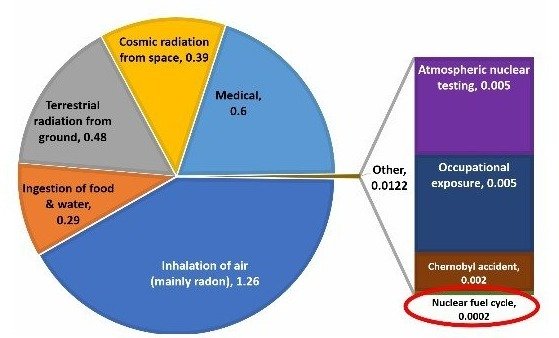 Radiation doses from natural and artificial sources in a typical geographic location. The unit are of millisieverts (mSv) per year 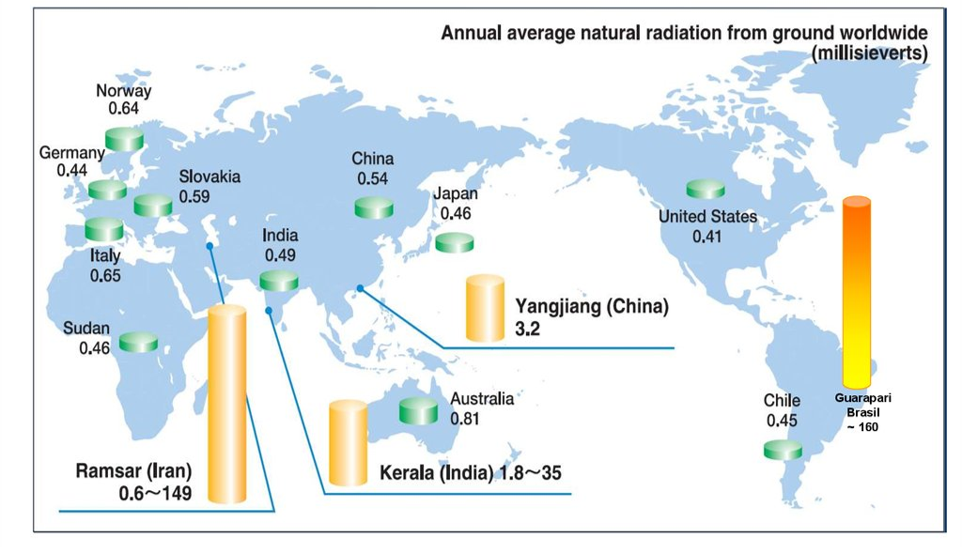 Variations of natural radioactivity around the world. The variations are due to the mineral contents of the dominant bedrock. The beach of Guarapari in Brazil is renowned for the radioactivity levels of 160 mSv per year.

The fundamental source of power from nuclear reactors is the binding energy of the nuclei.  All isotopes have a given mass, but this mass is not the simple sum of the masses of the component protons and neutrons. In addition, each nucleus has a binding energy with a magnitude as shown in the figure below. 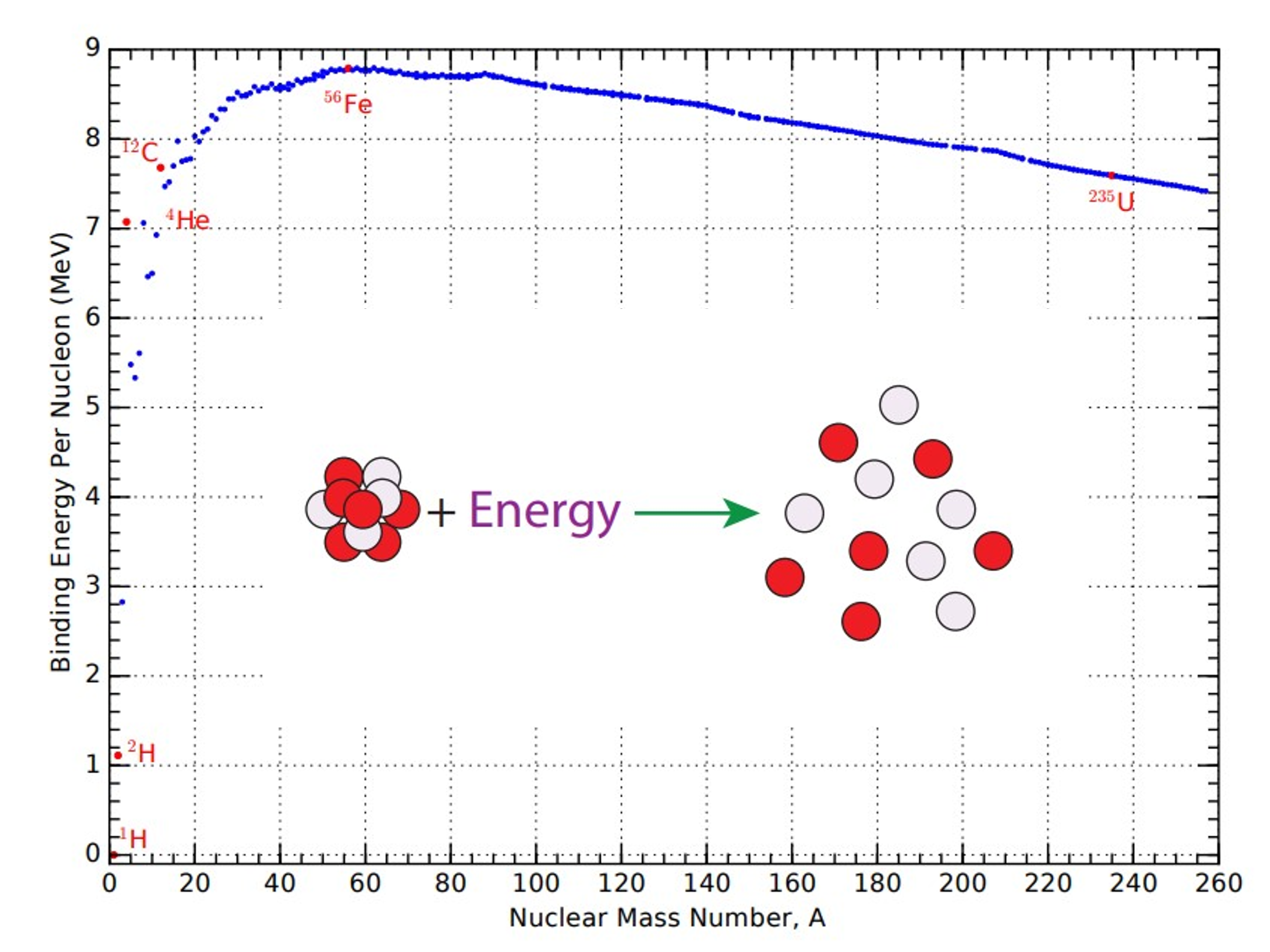 Nuclear binding energy per nucleon as a function of total mass number. The separated proton and neutrons have a higher mass sum than the bound nucleus. Energy is needed to split apart the nucleus. This stored binding energy in the nucleus can be released by merging nuclei (fusion) or splitting them (fission).

In this figure, iron (56Fe) sits at the peak of the curve with the largest binding energy. Nuclei to the left and right of the peak have lower binding energy and energy can be released by manipulating nuclear towards the centre as shown in the image below. 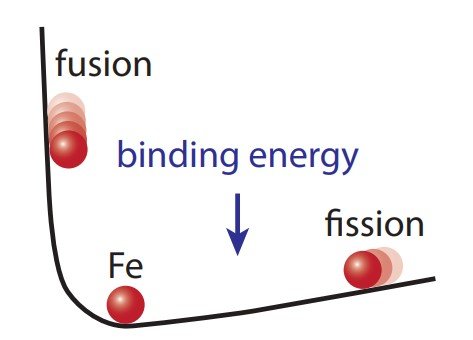 Turning the binding energy curve upside-down makes it easier to conceptualize fusion and fission driving toward the most tightly bound point (iron), like a ball might roll.

The basis of how the mass differences can be converted to energy is the famous Einstein mass-energy equivalence equation: E= Mc2.

The reactions of nuclear fission and nuclear fusion require very different condition to trigger them. For fission spontaneous uranium decays start the process with one nucleus decaying "naturally" and producing a neutron which provokes a second nucleus to split starting a chain reaction. The situation for fusion is different, here the deuterium and tritium must be brought into close proximity before that can react. 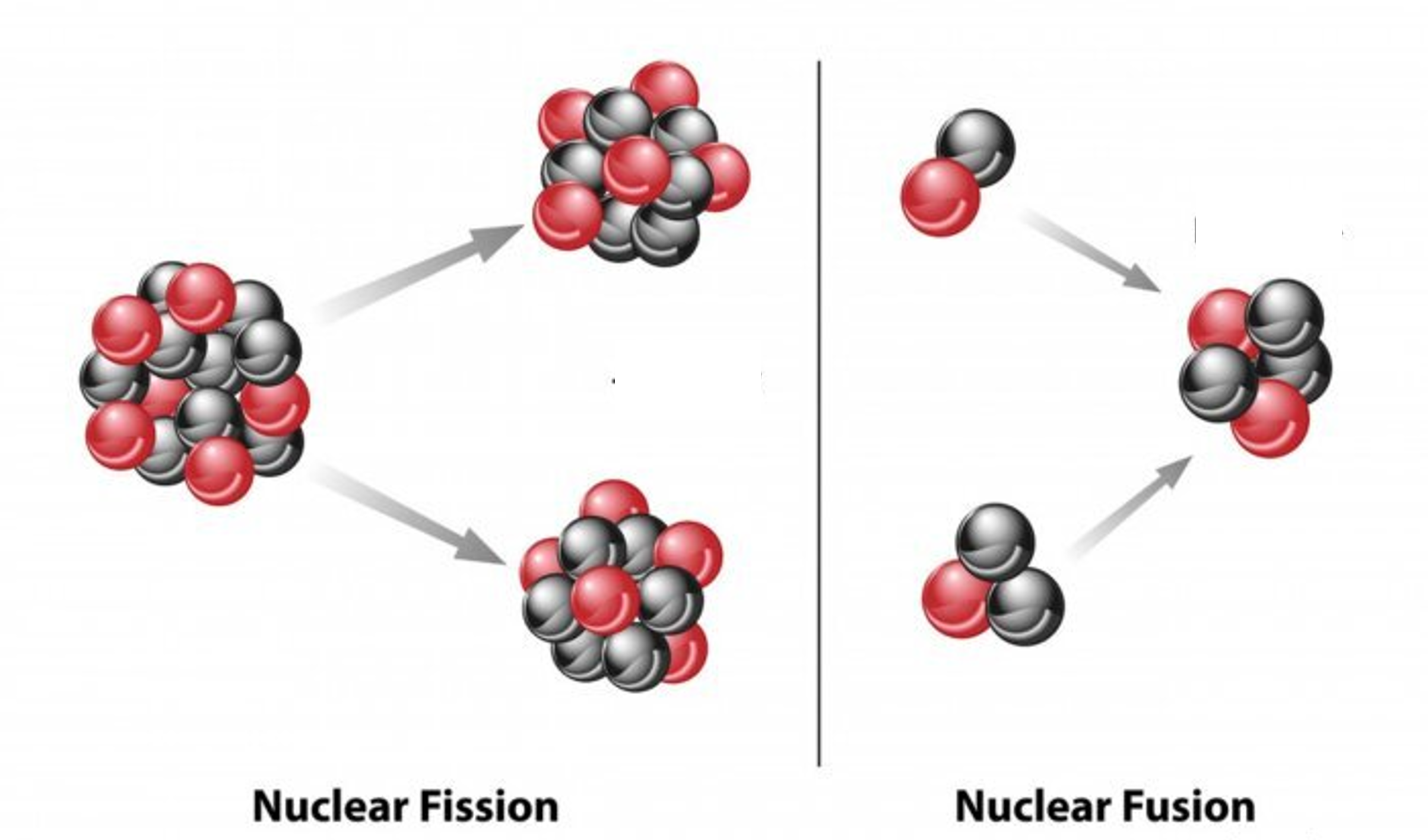 Splitting of heavy nuclei in fission and merging of light nuclei in fusion. Both processes release binding energy.

To initiate the fusion reaction the nuclei must be brought close enough together so that the short-range nuclear force can merge the nuclei. The natural electrostatic repulsion between the two positively charged particles acts to prevent this and very high temperatures are needed to give the nuclei the kinetic energy to overcome the repulsive force. The figure below illustrates this. 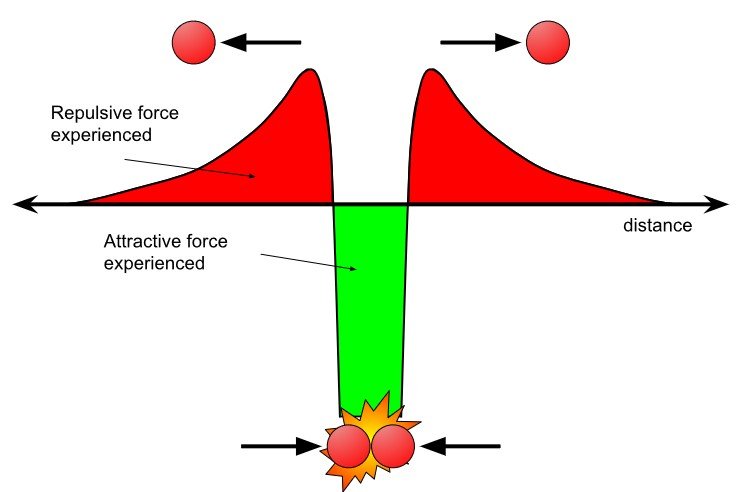 Illustration of electrostatic force which dominates at large separations of the nuclei which must be overcome before the nuclear force takes control and makes the nucleons fuse.

The temperature needed to initiate deuterium-tritium fusion is around 250 million °C, about 10 times the temperatures at the centre of the sun. Heating the plasma to attain these temperatures is one of the major challenges for fusion reactors.