The environment inside a fusion reactor is uniquely harsh with high temperatures and high radiation fluxes from the fusion reaction. New materials must be developed and the research for this is ongoing.

For the plasma facing components of a fusion reactor no material has yet been found which can survive the full lifetime of a power plant and current plans are to regularly replace some components. These replacements must be performed by complex remoted handing equipment because of the extremely high radioactivity of the internal tokamak components. These operations present a major technical challenge to realize, as well as necessitating long periods of reactor downtime to perform, leading to low availability.

The choice of materials has many considerations: mechanical property evolution during operation; transmutation and neutron damage; ion impact and sputtering; thermal properties; oxidation behaviour during air or water ingress; as well as the issue of fuel permeation and diffusion. Future fusion reactor designs now concentrate on tungsten for plasma facing surfaces and special steel alloys for structures.

The intense flux of neutrons emitted in the deuterium-tritium fusion reactions is the major challenge for materials in fusion reactors. Although fission reactors are subject to radiation damage, the much higher energies of the neutrons from fusion (14 MeV) compared to fission (around 2 MeV) means the problems are different, and much worse, for materials in fusion reactors. The flux of neutrons of different energies for fusion and fission (assuming equivalent reactor power) is shown in the plot below where it can be seen that there is a much higher flux of more potent high energy neutrons in the case of fusion. 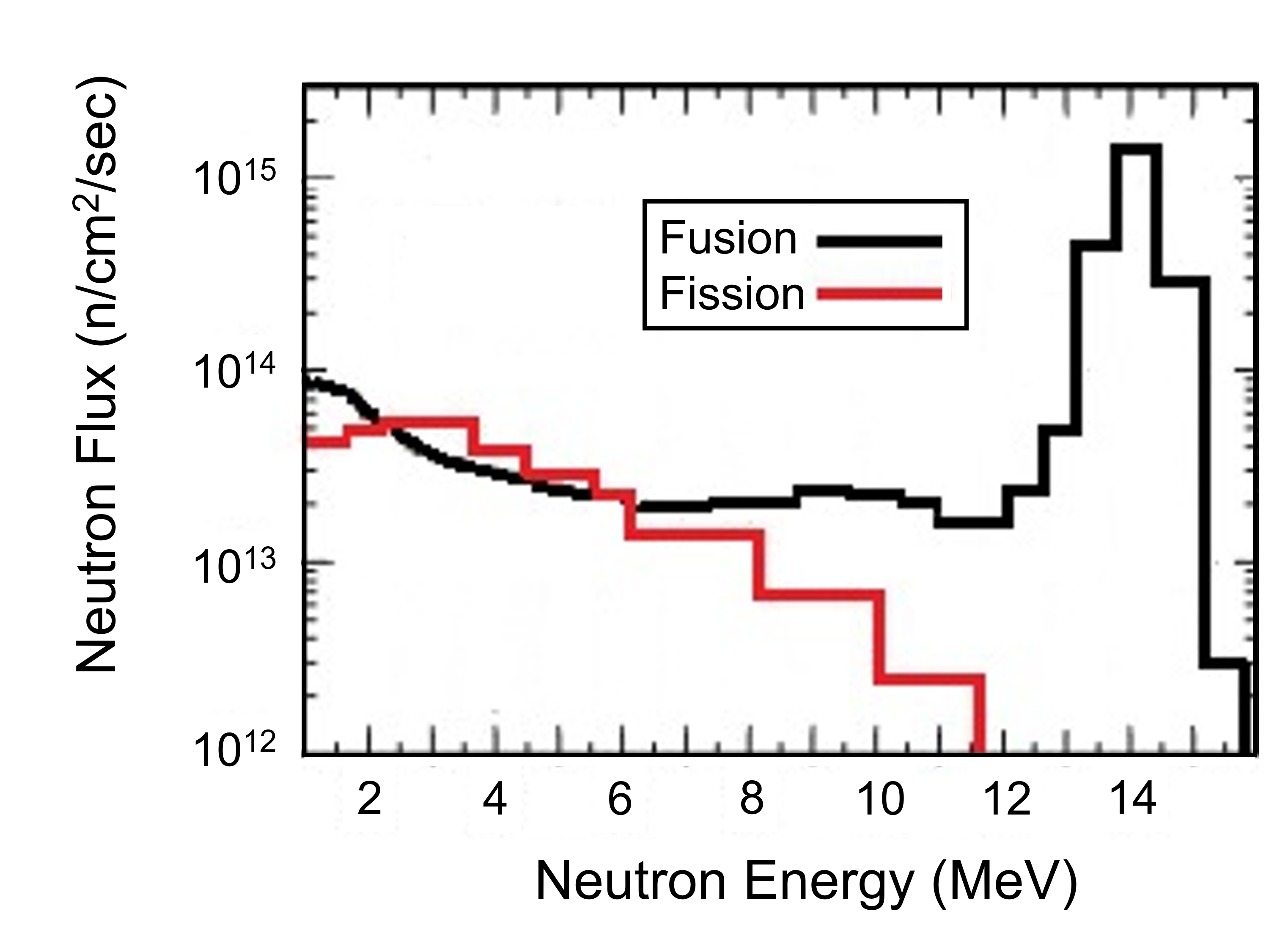 The neutrons incident on reactor components cause degradation of the material properties through displacement damage; accumulation of hydrogen and helium gases; and nuclear transmutation. The cartoon below illustrates some of the possible effects. 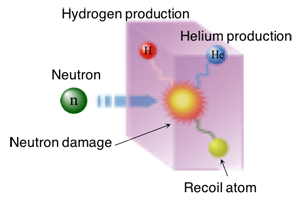 Schematic radiation damage effect of neutrons incident on a metal.

The figure below illustrates, in more detail, the complex processes which can take place after an energetic neutron displaces an atom in the crystalline metal lattice. 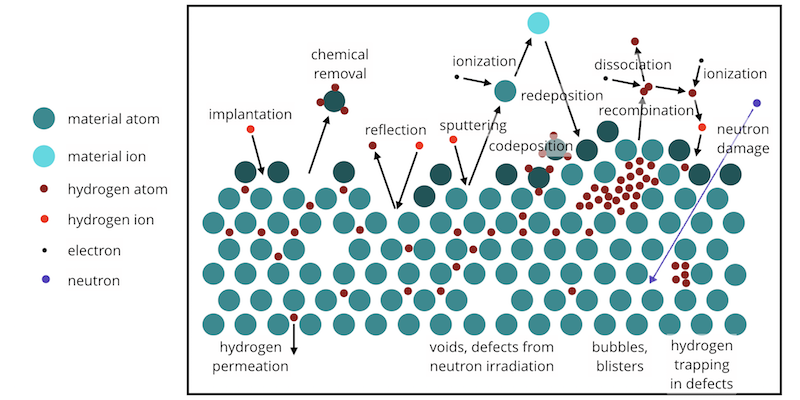 Illustration of the complex radiation damage processes which can be caused by a large flux of high energy neutrons impacting a metal.

The production of hydrogen and helium gas bubbles inside a metal is particularly damaging for the structural integrity. Neutron interactions produce alpha particles and helium atoms in materials. Since helium has extremely low solubility in metals, it tends to accumulate and precipitate into nanoscale gas bubbles. The figure below shows examples of transmission electron microscope images of helium bubbles formed in metals.

Dense helium bubbles after irradiation in metals: (a) aluminium; (b) tungsten; and (c) zirconium.

The plot below shows the different time and length scales of the radiation damage effects which are expected in a fusion reactor. 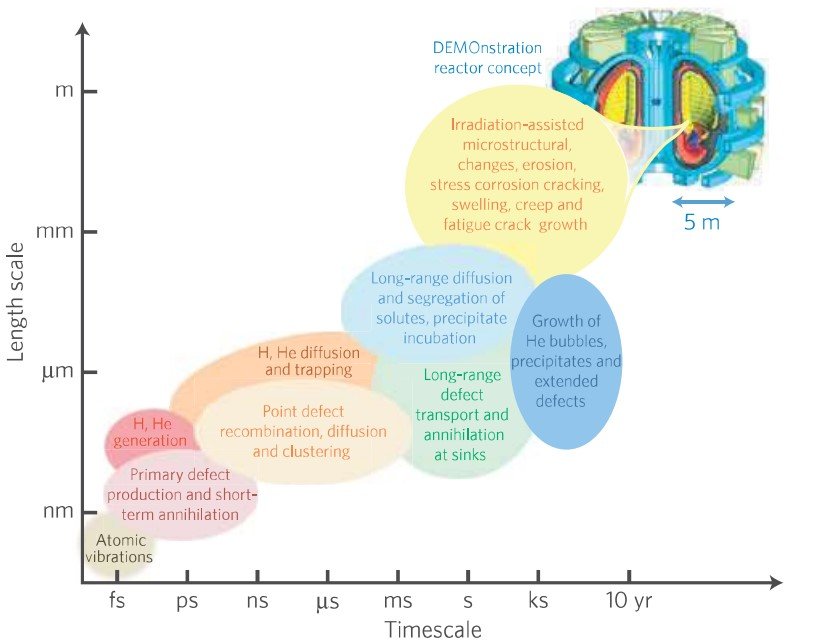 Schematic illustration of time and length scales of damage processes which result in property degradation from neutron irradiation in plasma facing component of tokamak fusion reactors.

A review of the status of material research for fusion is given in Knaster et al., which emphasises the pressing need for appropriate test facilities which produce a neutron flux with the same energy and intensity as a fusion reactor to develop and test new candidate materials. The page Essential Test Facilities discusses the proposals. 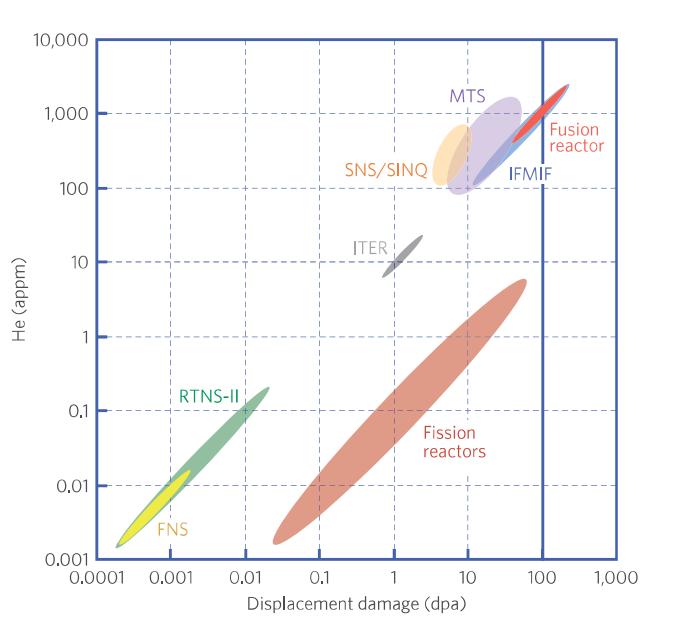 The above plot illustrates the higher expected levels of both displacement damage and helium gas formation in metallic lattices expected at fusion reactors compared to fission reactors. Past and currently operational test facilities are unable to provide sufficient fluxes of high energy neutrons to properly evaluate materials for fusion reactor and only the International Fusion Material Irradiation Facility (IFMIF) will be able to do so.

With the present status of materials available for fusion reactors it will be necessary to replace certain components on a regular basis. The current plans for the DEMO reactor require the following programmed component replacements:

These component replacements require complicated remote handling operation because of the high level of radioactivity induced in them. These operations will require a significant downtime and reduction in the availability of the reactor for electricity for production.

The unknown survival time of the vacuum vessel will define the lifetime of the whole DEMO reactor because in the current design it will be impossible to replace.