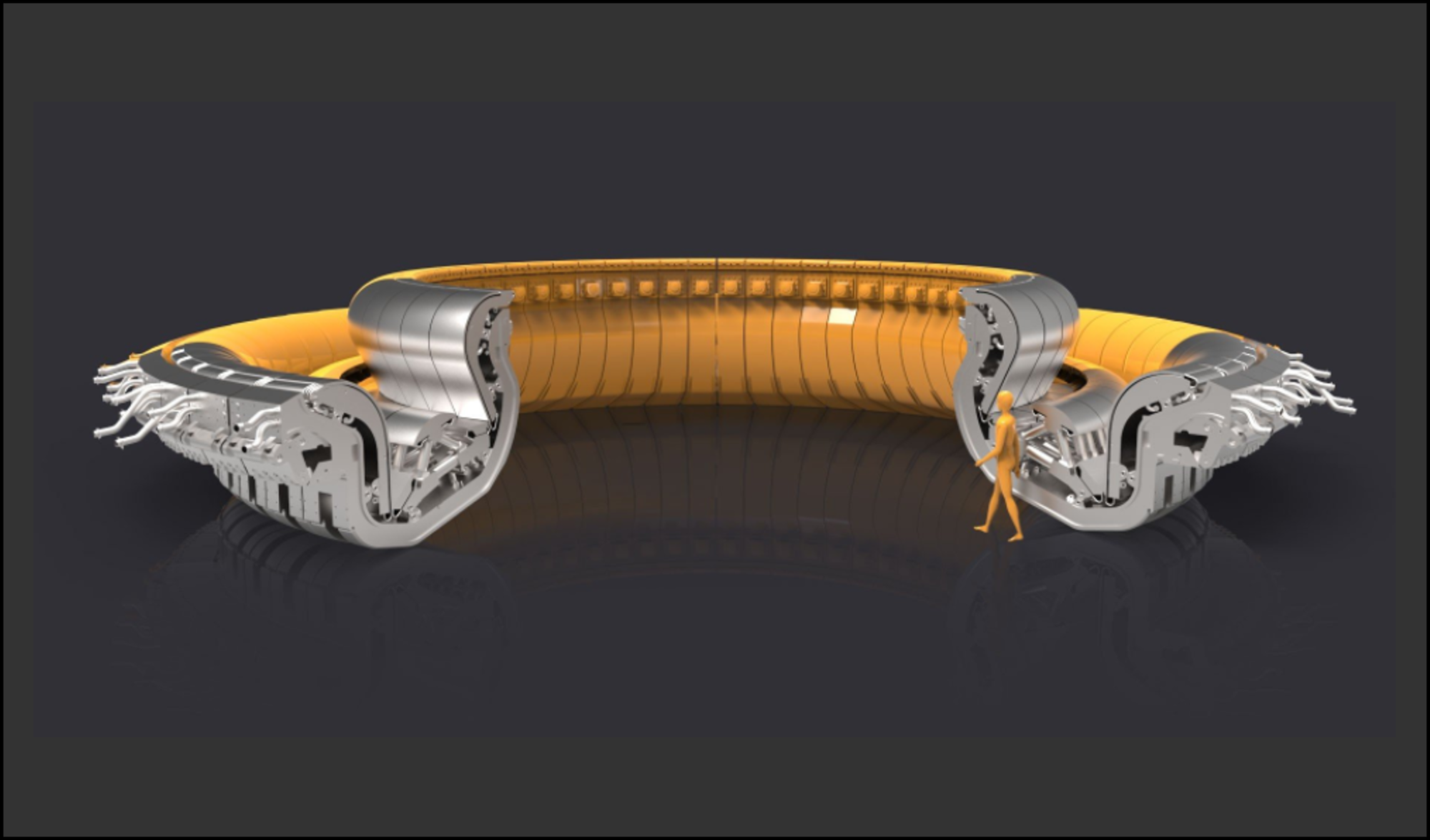 The Divertor is situated at the bottom of the tokamak vacuum vessel with a mechanism to scrap off the edge of the stored plasma as it circulates and send the gases to the exhaust. It has the following functions:

Divertor in a fusion reactor

The magnetic field configuration with a "separatrix", facilitates the exhaust of the plasma to the exit cavity and pumping system. 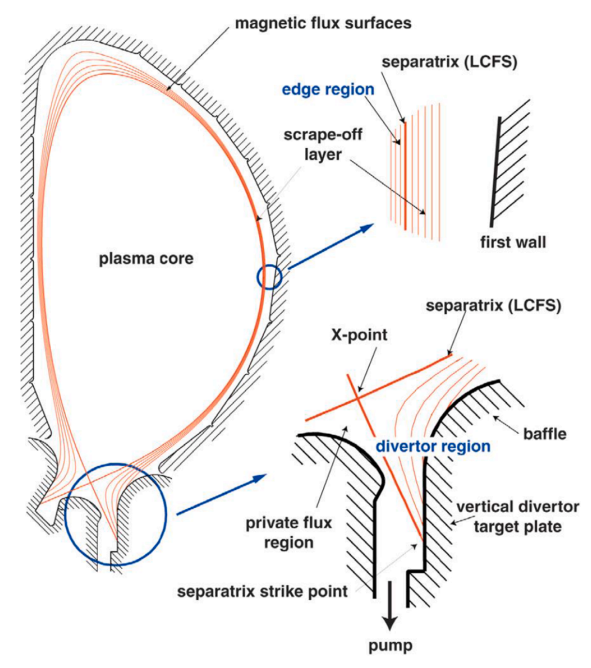 Plasma is guided to bottom of tokamak for extraction by divertor

Because of the high radiation dose and the subsequent radiation damage, the divertor must be frequently replaced. The design specification for replacement is after 1.5 full power year of operations. To allow the replacement, which must be performed with remote handing equipment inside the vacuum vessel, the divertor is designed with 48 "cassettes", shown in the figure below. The refurbishment of the cassettes will take place ex-situ in a hot cell outside the tokamak building. 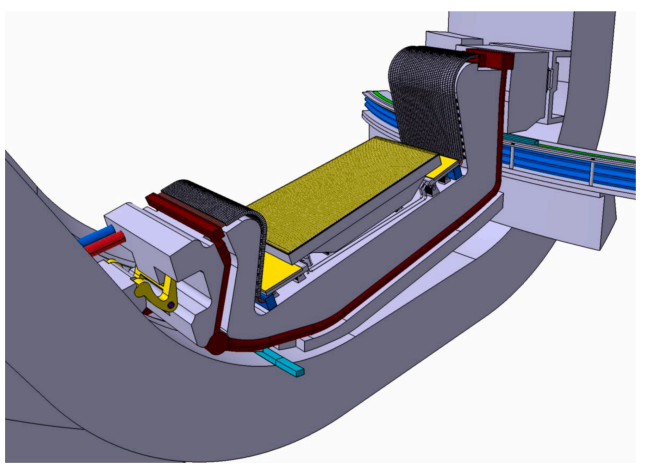 The next figure shows the radiation damage calculations for the steel parts of the cassette, indicating some parts reach the 6 displacements per atom limit for EUROFER before the specification time of 1.5 full power years. 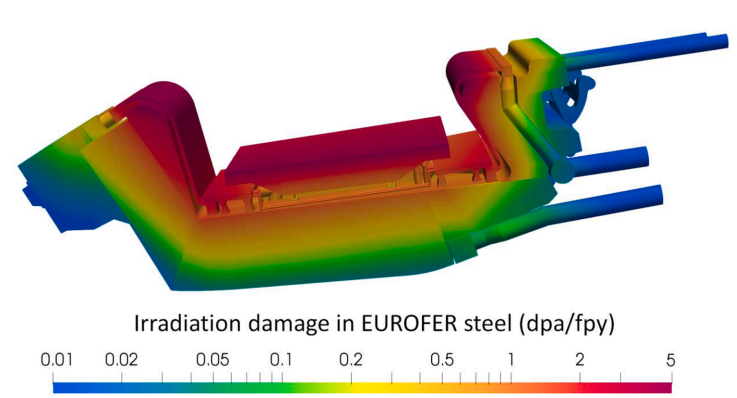 The following figure shows the further radiation damage problem of helium production causing bubble formation. This indicates levels suggesting there might be serious complications in the cassette refurbishment.

Helium production rate due to radiation damage in divertor cassette in units of atoms parts per million (appm) per full power year.

These radiation damage calculations indicate there must be improvements made to divertor designs and/or materials.

The use of limiters is being considered in the EU-DEMO, to protect the first wall surfaces against plasma instabilities and disruptions. Several planar limiters are placed on the wall at specific toroidal and poloidal positions where a direct contact with the boundary of collapsing or moving plasma can be expected. The limiters would protrude into the plasma scrape-off-layer by 30-70 mm beyond the level of plasma facing surfaces, such that in an instability mode, the plasma would touch the limiters first. 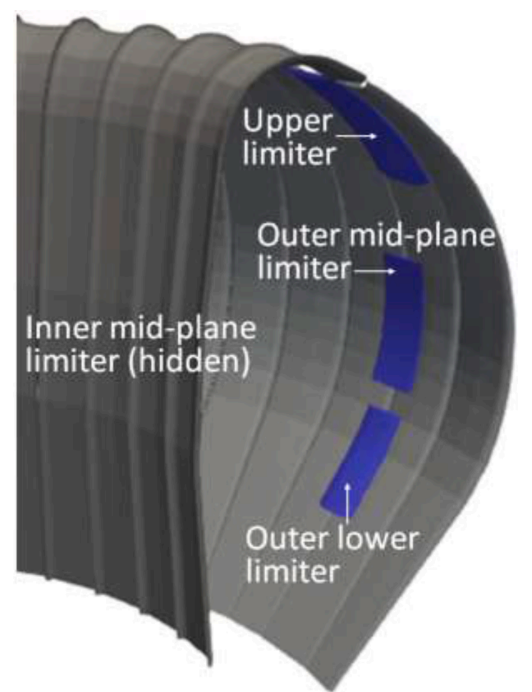 The figure below shows the plasma instability modes the limiter system is designed to protect against. The table indicates the heat loads on the limiters in each event. 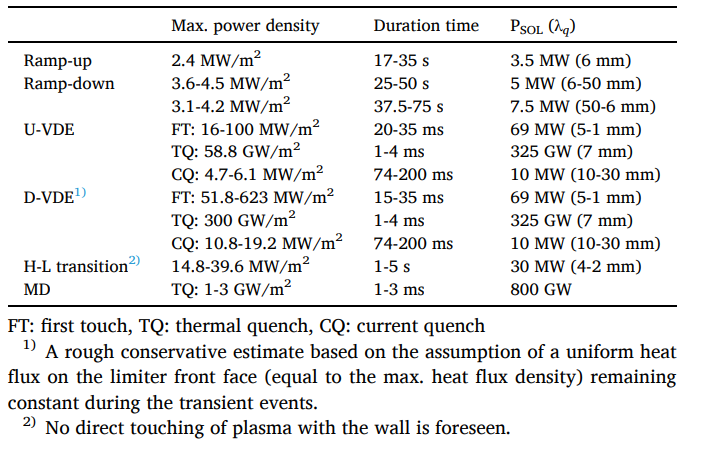 With their sacrificial role, the limiters become the components in the tokamak with the highest radiation damage and must be replaced the most frequently.