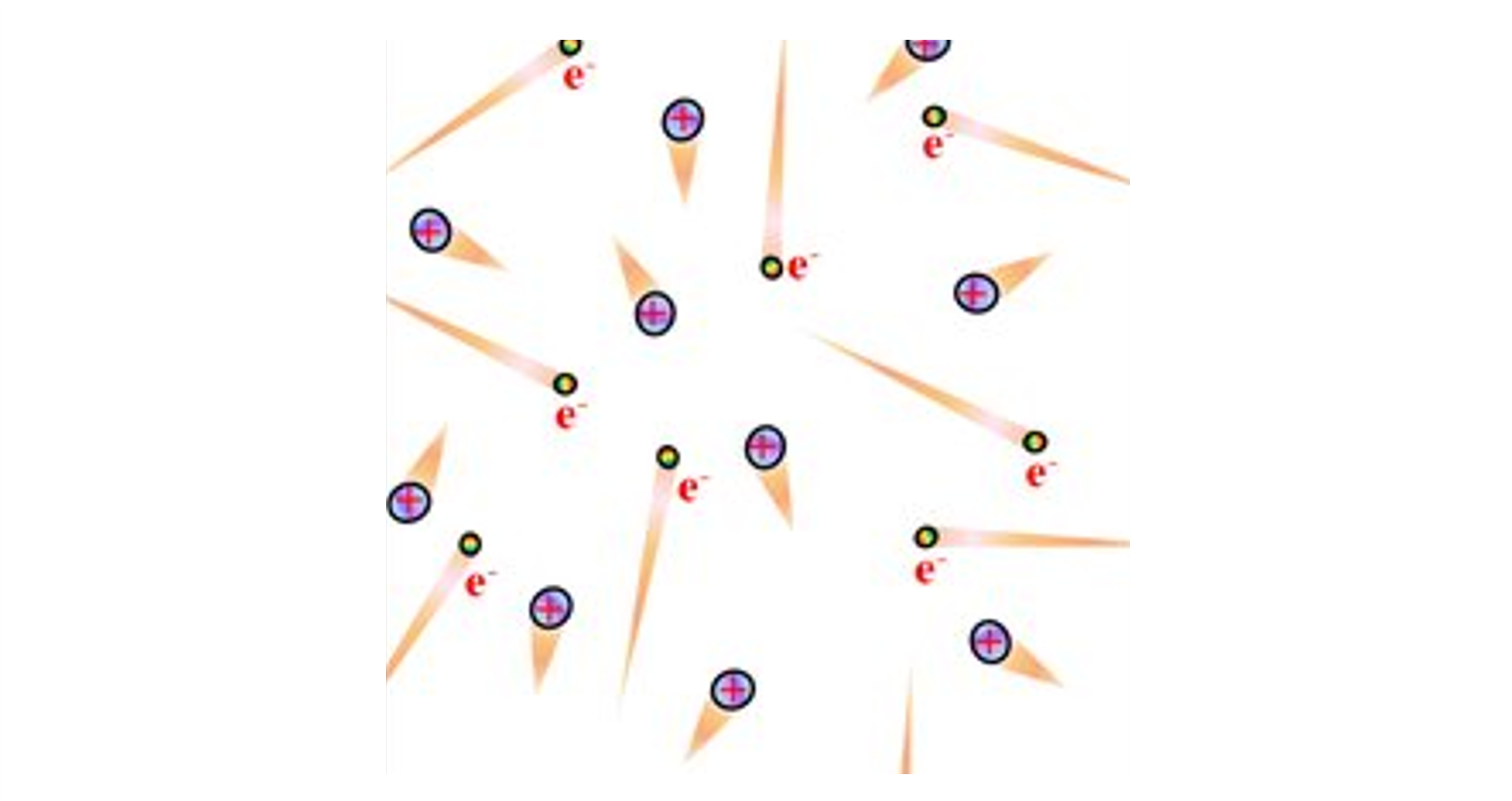 All efforts towards the development of nuclear fusion reactors have so far involved the initiation of fusion reactions in a plasma which is usually confined by magnetic fields. The favoured configuration of magnetic fields is a device called a Tokamak and it is this mainstream fusion device which is covered in the most detail on this website.

A plasma is superheated matter – so hot that the electrons are ripped away from the atoms forming an ionized gas. Plasma is often called “the fourth state of matter,” along with solid, liquid and gas. Just as a liquid will boil, changing into a gas when energy is added, heating a gas will form a plasma – a soup of positively charged particles (nuclei, also called ions) and negatively charged particles (electrons).

The plasma must be heated and contained to enable the fusion reactions. The plasma containment method employed in mainstream fusion reactors uses a system of magnetic fields, where charged particles (ions and electrons) spiral in a helix around the magnetic field as indicated in the figure below.

Charged particles (ions/atomic nuclei and electrons) are trapped in a magnetic field.

To stop the particles escaping out of the device, confinement devices such as the tokamak bend the magnetic field into a closed loop into a doughnut shape, so the particles are trapped. The image and the animation in the video below illustrate the concept of this confinement. Another similar confinement concept is that of the stellarator which has a twisted magnetic field. 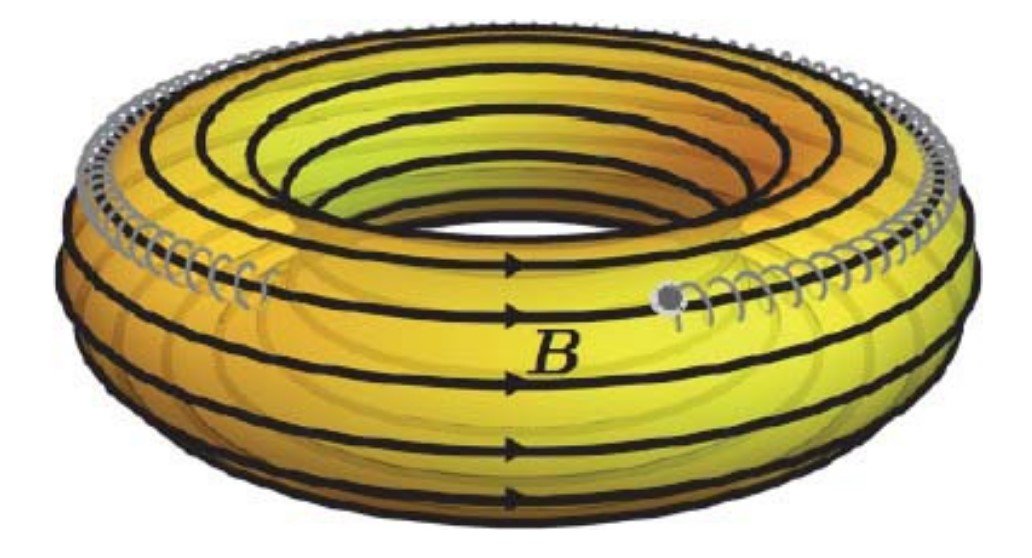 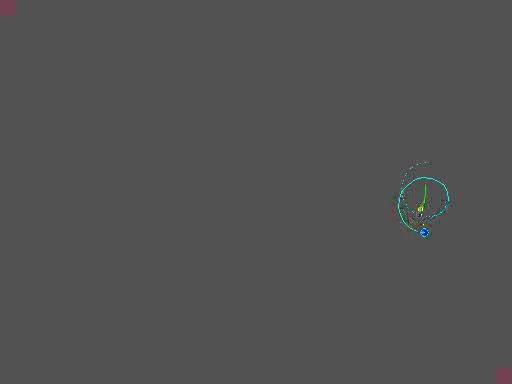 Animation illustrating motion of a charged particle confinement within a tokamak.

The development of magnetic confinement devices has been underway since the 1950s. The favoured devices are now Tokamaks, invented originally in the USSR. A major advance in tokamaks has been the use of superconductors to construct high field magnets. There has been a tendency to build bigger and bigger devices in order to retain a stable plasma circulating in the vacuum vessel for as long as possible. The plot below shows the progression in fusion power in tokamaks, such as TFTR and JET, over the past few decades together with the expectations for the ITER machine currently under construction.

Advances in fusion thermal power produced in experimental devices. To date only TFIR and JET have operated with deuterium-tritium (DT) fuel. The next major step in this progression, will be ITER which is expected to operate with DT reactions after 2035.

The images below indicate the scale of the most recent tokamak devices. 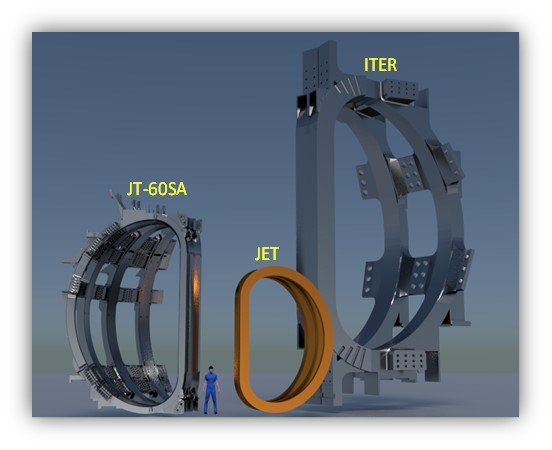 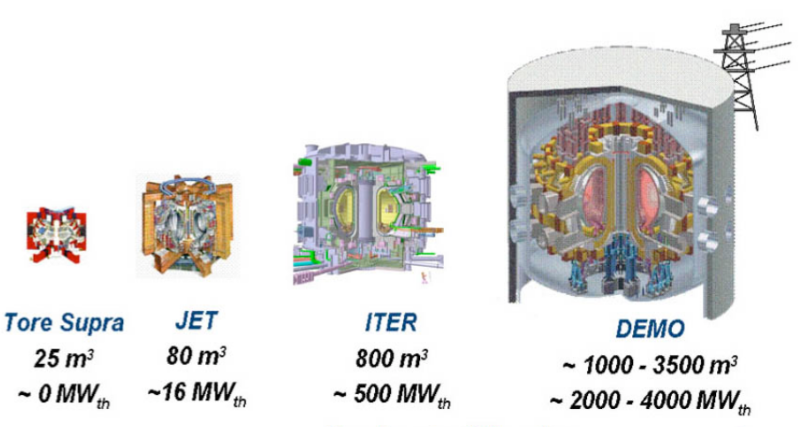 Tokamaks past, present and future. The volumes of the plasma vessels are given, together with the peak fusion power produced.

Tore Supra was the first tokamak to use superconducting magnets but never used deuterium-tritium (DT) fuel to produce fusion. JET was one of the first devices to use DT fuel and for a short period produced thermal energy with fusion.  ITER is in construction and plans to have fusion reactions and produce thermal energy but will not have a system to convert this energy to electricity. A number of demonstration reactors, DEMO, are being designed as the first fusion power plants which are intended to produce electricity.

All fusion devices so far have worked in pulse mode where the plasma confinement operates in cycles with short pulses lasting seconds to minutes. In a tokamak, the confinement cycle starts with the plasma injection into the vacuum vessel followed by a process with a changing solenoidal magnetic field to induce an electric current in the plasma and cause it to circulate in the torus. The current in the plasma causes heating which increases the temperature. To attain the temperatures needed for fusion to occur, additional devices are needed to add further external heat. Once the temperature is high enough fusion can occur and, in the right conditions, maintain the plasma temperature for sustained fusion. In this state, heat can be removed from the plasma via neutrons impacting the blanket system and then transported to a steam turbine for electricity generation. After a certain time, the plasma is extracted from the vacuum vessel and the confinement cycle ended.

All these steps are complex and have required decades of research and development to advance towards a functional power plant, but many problems are still unsolved. Among the remaining challenges is the reduction of uncontrolled losses of plasma which risk damaging the machine. Another challenge is to make the confinement pulse duration much longer and the inter-pulse time much shorter than is currently the case. Present devices have pulse length of minutes and inter-pulse preparation times of hours.  To produce continual electricity, a commercial fusion plant must have confinement pulses of weeks or months with short preparation times.

There are a number of quantities (conditions) to measure the progress of fusion devices towards achieving sustained fusion which are based on the plasma density, temperature and confinement time. The first is called the "Lawson Criterion", after the British physicist who introduce it, and gives the conditions for a steady-state plasma to keep itself hot with the energy generated in the fusion reaction. This condition is referred to as ignition, analogous to a fire. In the fusion reactions, much of the energy escapes the plasma as neutrons, which are what produces the heat in the blanket system to eventually generate electricity. Only the charged particle nuclei remain trapped in the plasma and contribute to sustaining the temperature. To achieve ignition, the amount of energy produced in these charge particles must be larger than the energy which leaks away from the plasma. This gives the Lawson Criterion, which is shown in the figure below for three fusion fuels. 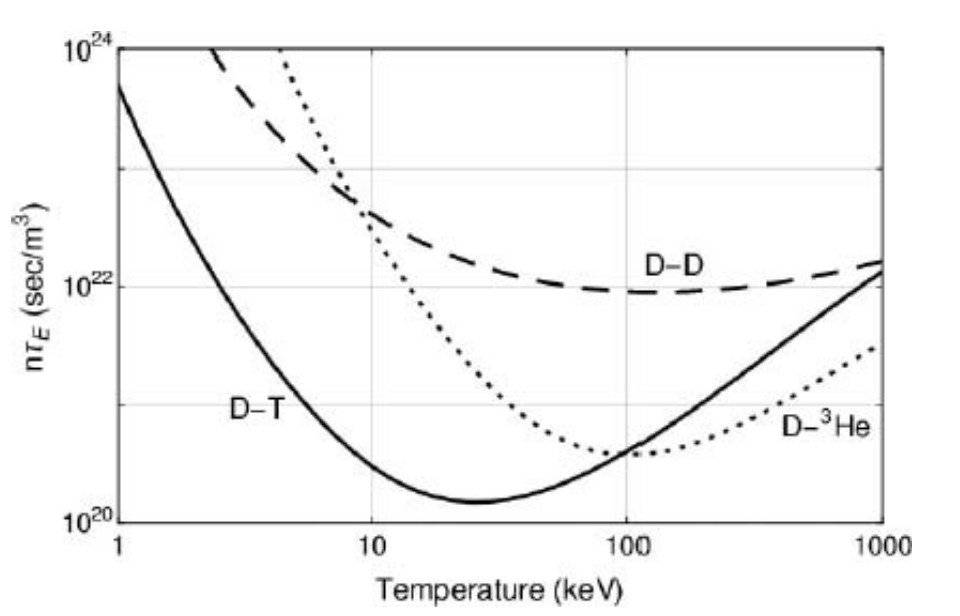 The Lawson criterion for three different fusion fuels: D-T; D-D and D-3He. Note that D-T fusion can be achieved with the lowest value of n τE and temperature.

It shows that D-T fusion can be achieved with the lowest values of n τE and temperature, with n τE > 2 1020 s/m2 and the temperature 25 keV (= 250 million °C). Hence this is the reaction which is pursued in the majority of fusion projects.

Another condition which is often used, is a simplification of the Lawson Criterion which applies for all fuels, called the Triple Product: n τE  T > 5 1021  keV-s/m2 .

A further measure of fusion devices is Q, defined as:

As yet no device has achieved Q > 1, which would imply more has been produced than input. This measure often causes confusion because a lot more energy is used to power the tokamak multiple auxiliary systems like magnets than is actually input into the plasma. Because of this, the discussion of energy gains of fusion devices is frequently exaggerated and misunderstood.

The plot below shows how machines have progressed in increasing the triple product plasma values and plasma temperature. The goals for ITER and the ignition condition.

Progress in fusion triple product (and the equivalent value of Q) over time.

The plot below shows the progress of triple products versus pulse duration. 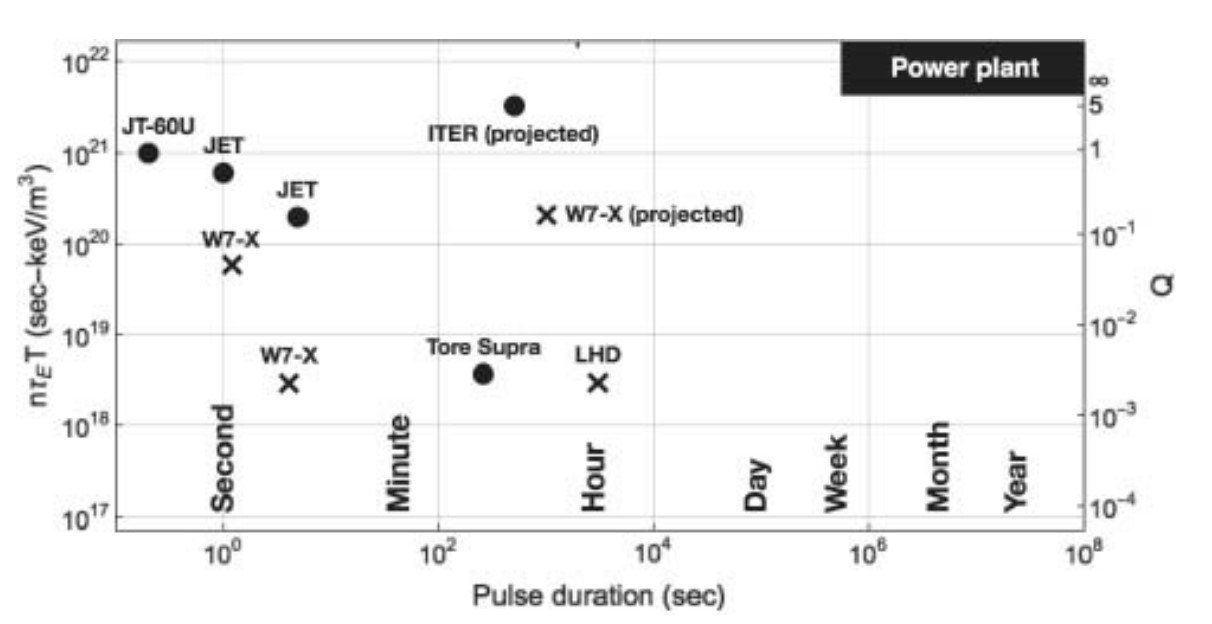 Fusion triple product versus pulse duration with power plant goal in the top corner. The devices indicated with disks are tokamaks and those with crosses are stellarators.