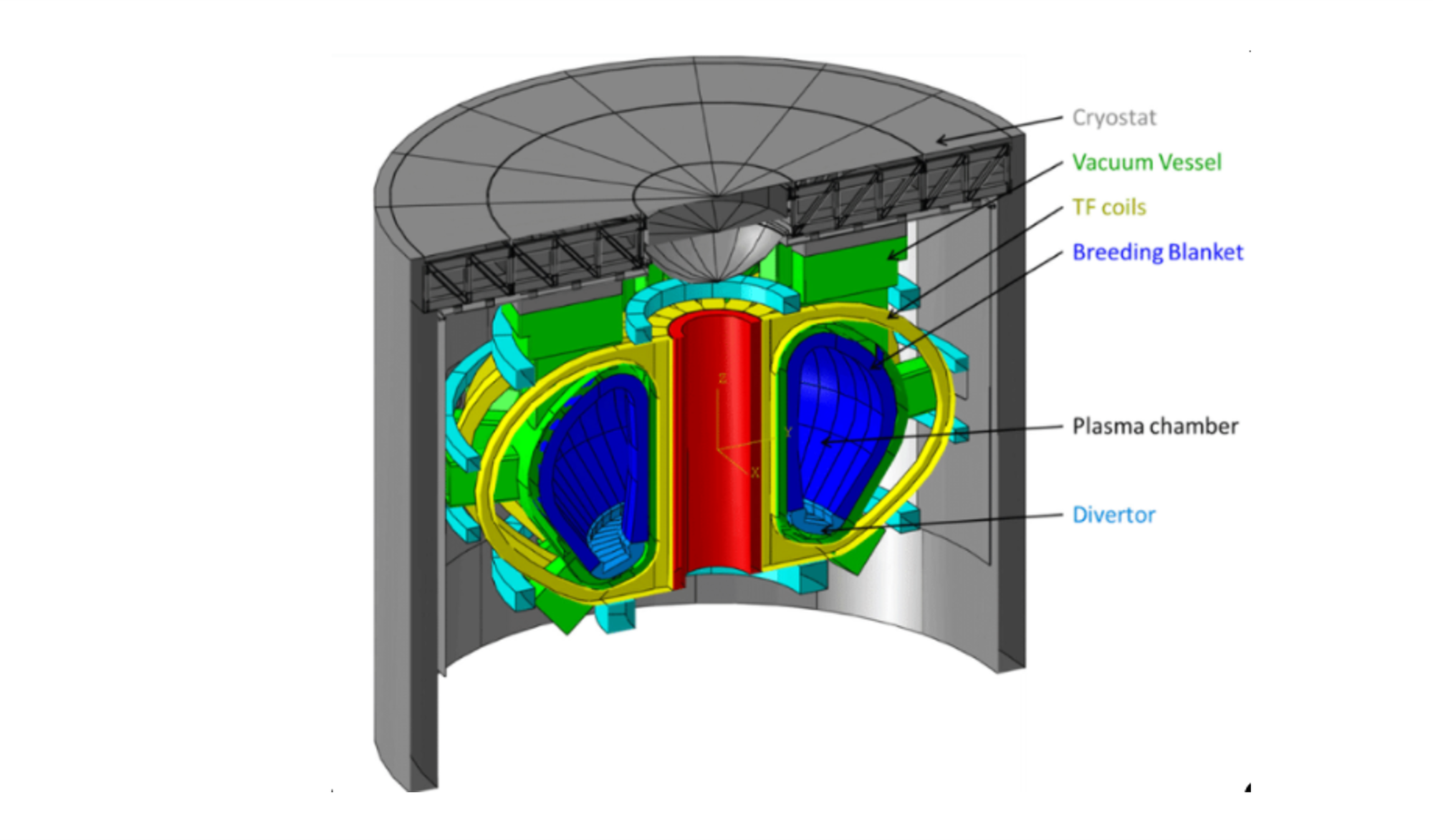 From around 1950, there have been numerous devices constructed to test concepts of fusion reactors, most of these devices have used the technique of Magnetic Confinement Fusion (MCF), with a few using Inertial Confinement Fusion (ICF) and other concepts. The most successful operational devices have been MCF machines called Tokamaks, a concept which originated in the Soviet Union. The website All the World's Tokamaks gives a comprehensive list of all tokamaks, past and present. Two tokamaks have actually made fusion energy with deuterium-tritium fuel: the Princeton TFTR tokamak in 1993 and the European JET tokamak in 1997.  In 2010, construction started for the international ITER tokamak, which has expectations to have the first D-T operations after 2035. After ITER will come demonstration reactors, called DEMO, capable of producing electricity. 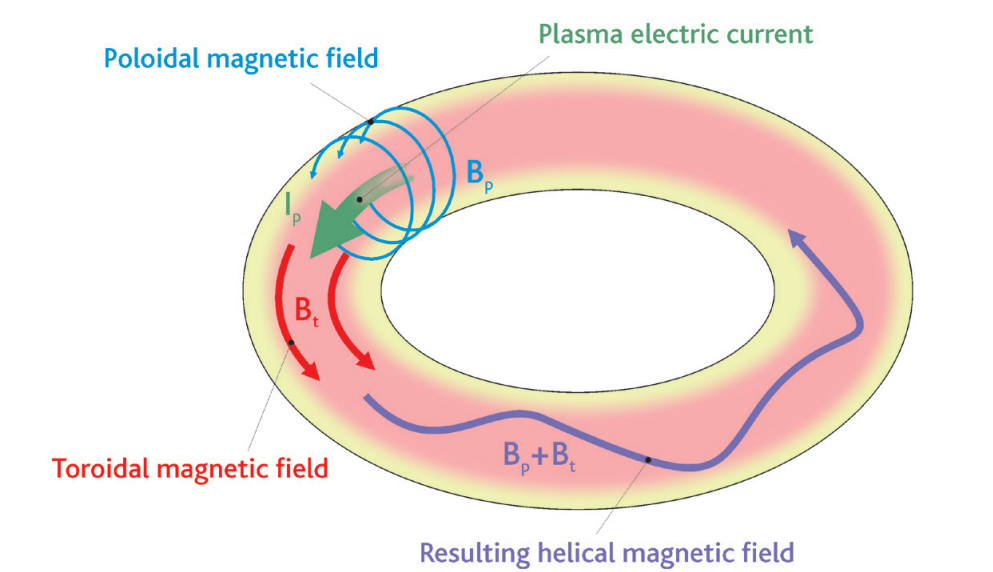 Concept of a tokamak confinement with helical magnetic field formed by two separate coil systems. The plasma electric current is induced by a third set of coils.

The solenoidal magnetic field induces a current in the plasma which causes ohmic heating. Additional heating is provided by external devices such as neutral beam injectors and electromagnetic wave antennae.

The illustration below shows the principal components of a tokamak fusion reactor. 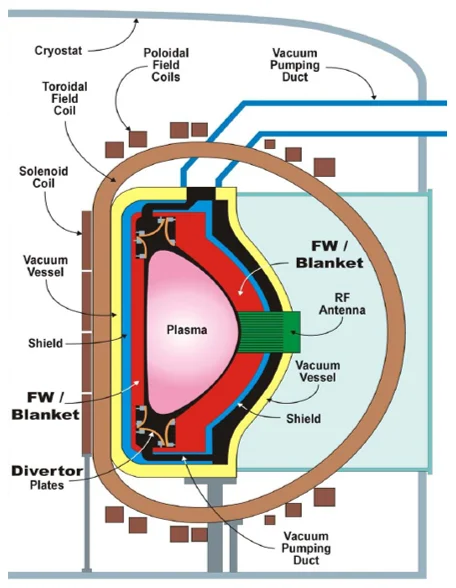 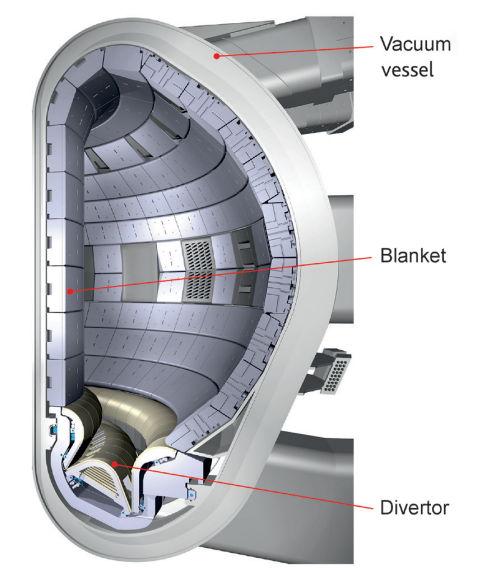 The enormous flux of neutrons emitted from the deuterium-tritium reactions in the hot plasma, pass through the plasma facing first wall and are stopped in the blanket in which a coolant is circulated going to drive a turbine for electricity generation. The blanket also has the essential task to breed tritium fuel. Beyond, the shield must reduce as much as possible the neutron flux which hits the magnet coils. 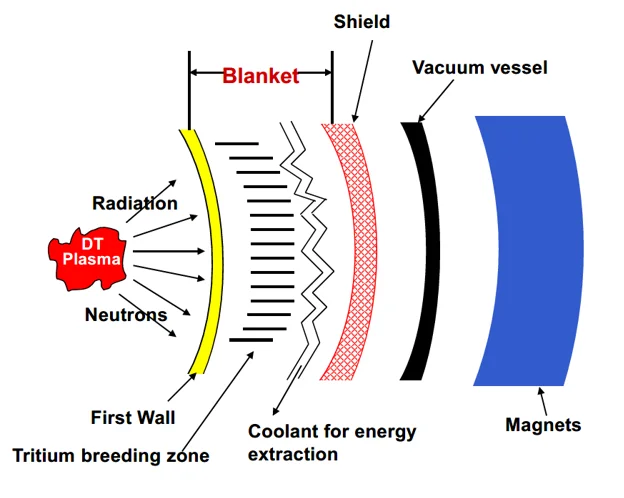 Schematic of feature of tokamak outside the plasma

An unavoidable feature of fusion reactors using the D-T reaction, is that the inner components will rapidly become radioactive due to neutron activation and suffer radiation damage from the enormous neutron flux emitted from the fusion reactions in the plasma. The components near the plasma, such as the Breeder Blanket and the Divertor, must be frequently replaced because of the damage, requiring remote maintenance equipment. The image below indicates the complexity of the components required for such a remote handling system. Surrounding all these components is a massive concrete "Bioshield" to contain any escaped radioactivity and toxic material, resulting from any accidents. Beyond the bioshield, is a complex of building with diverse functions. 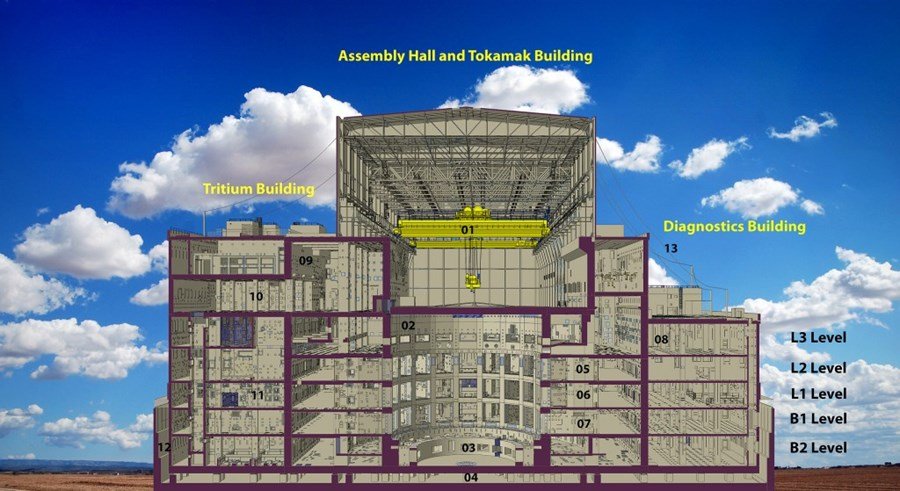 Complex of buildings around tokamak

The major unsolved problem of plasma confinement in tokamaks is the phenomena of "disruptions ", where the plasma is lost in a catastrophic manner. This plasma loss can damage the tokamak structure in a number of ways: heating of walls causing vaporization; induced currents in vacuum vessel causing mechanical stress and runaway electrons which damage the plasma facing components. In operations, the large tokamak JET experienced frequent disruptions: 2309 over the last 10 years of operation. Some of the disruptions were severe and on one occasion the whole machine, reportedly, moved a few centimetres in the air.

Tokamak designs for future devices have mitigation systems for disruptions to limit the damage, consisting of rapidly injecting frozen gas into the machine to modify the plasma and slow down the plasma loss.

The ITER project is the latest in the long series of increasingly large magnetic containment devices. Construction started in 2010 and was 77% complete by the end of May 2022. 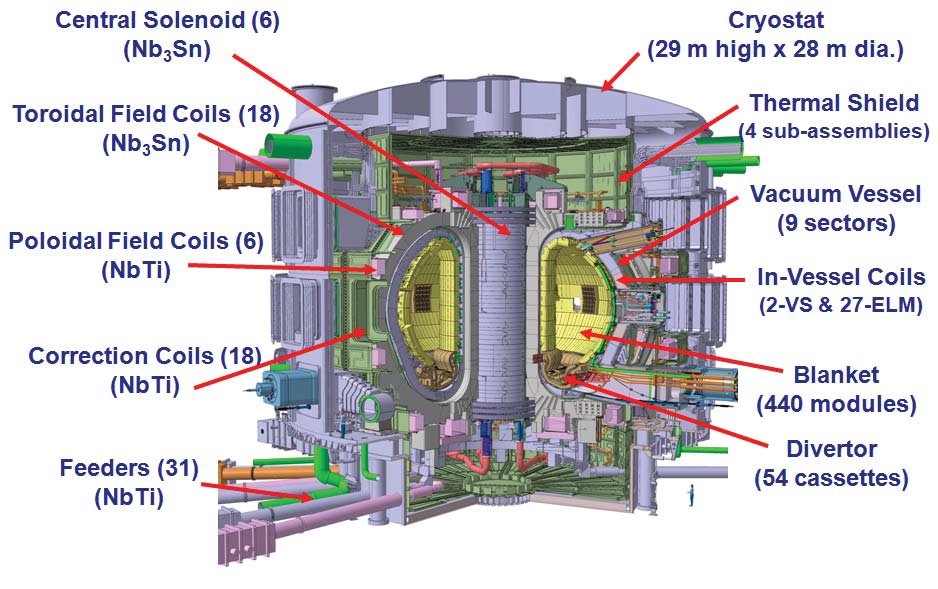 The objectives of ITER are:

ITER will never send electricity to the grid because there is no system to make the heat from the plasma work a turbine.

The ITER tokamak will have a toroid radius of 6 meters and weigh about 25000 tonnes. The magnetic confinement is provided by a complex system of superconducting coils and there are multiple external heating devices. There will be test prototype breeder blanket modules.

ITER must prepare the way forward towards real fusion reactor and improving plasma stability will be paramount. Advancing technology will be an important achievement but the possibilities to develop new knowledge on materials and tritium breeding will be limited.

The objective of the next phase of fusion R&D, is to construct prototype fusion power plants with the extraction of energy to generate electricity.

While ITER is an international collaboration project, the next stage to build an actual prototype fusion reactor will consist of separate machines in different countries. Most use the word "DEMO" in their description but have different designs. The figure below indicates the EU-DEMO design which has as a basis ITER tokamak design, scaled by 1.5 times in linear dimension, giving a tokamak with a radius of 9 meters and a reactor volume about three times that of ITER. The discussion on this website is largely associated with the EU-DEMO design. 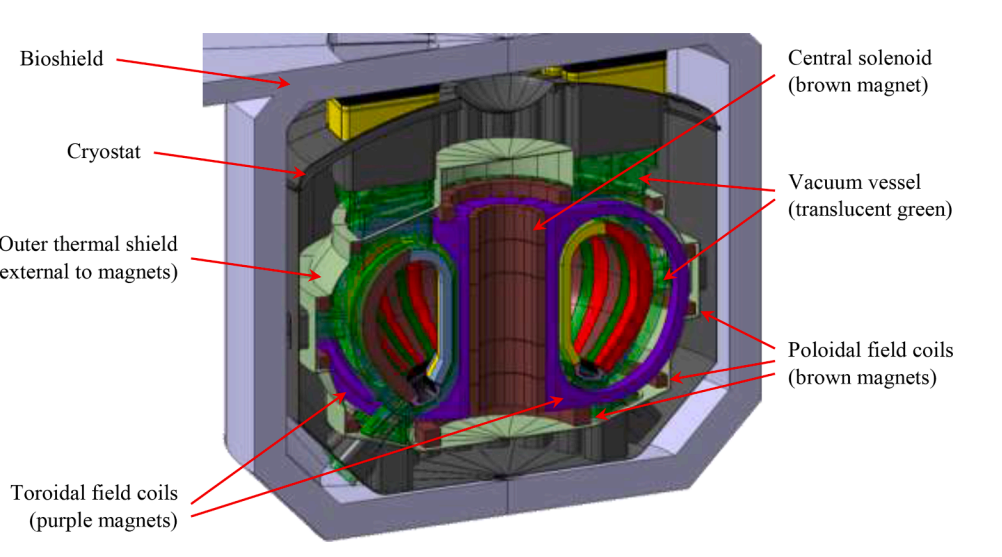